As part of its continued national leadership in digital health technology innovation and public-private collaborations, the USC Center for Body Computing (CBC) has teamed with VSP Global’s innovation lab, The Shop, and the USC Gayle and Edward Roski Eye Institute to take wearable health for the first time to the eyes. 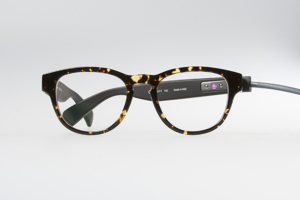 The pilot study, which kicked off Aug. 27, will assess the users’ engagement with and feedback of the smartphone app synched to the embedded sensor in the first-of-its-kind prototype optical frame, LevelTM, created by The Shop.

USC employees who wear eyeglasses daily volunteered for the study, which tracks the participant’s steps, calories burned, distance traveled and activity time by technology seamlessly embedded in the temple of the frame — including an accelerometer, a magnetometer and a gyroscope — and synched wirelessly via Bluetooth to an accompanying smartphone app.

The app will synch with VSP Global’s Eyes of Hope initiative, where study participants accrue points based on reaching daily step goals. Once a certain number of points are achieved, the user will trigger the donation of a comprehensive eye exam and pair of glasses to someone in need. Participants are able to choose a charity of their choice for the donation among seniors, school-age children, veterans or the homeless population.

“In this next phase of our continued collaboration with VSP we’re thrilled to be partnering with them to maximize the wearable sensor in eyeglasses by engaging wearers in improved health fueled by philanthropic endeavors,” said Leslie Saxon, MD, founder and executive director of the USC Center for Body Computing. “We’re using the eyes as a window into the soul and the heart — it’s a testament to the power of digital tools to improve health and improve the world at the same time.”

Jay Sales, co-director of VSP Global’s The Shop, added, “Not only is Level a unique health-tracking technology that fuses function, fashion and digital health in a platform as common as eyewear, our collaboration with USC will also allow VSP to study Level in the context of increasing health and wellness outcomes while creating empathy and opportunity for someone in need. As a community-based not-for-profit, that interplay is core to who we are as a company.”

USC Roski Eye Institute director and interim dean of the Keck School of Medicine of USC, Rohit Varma, MD, MPH, said, “Offering our patients digital health tools and wearable technology in our eye clinics is the wave of the future. As one of the key medical partners in the USC CBC’s Virtual Care Clinic, we’re proud to be at the forefront of digital health innovation led by Dr. Leslie Saxon and her team. The USC CBC is a showcase of how the multidisciplinary experts at USC in medicine, science, technology, engineering, entertainment, athletics, etc. are partnering with innovative partners such as VSP Global to change health behavior and empower patients.”

Assistant professor of clinical ophthalmology and chief optometrist, Gloria Chiu, OD, FAAO, FSLS, who led the study’s eye care team for the USC Roski Eye Institute, feels that having a digital health sensor embedded in eyeglasses is going to show more reliability and consistency in biometric measurements as opposed to wrist-based wearables. She shared that users may forget to wear a wristband or have vigorous hand movement that can be misinterpreted as steps whereas eyeglasses are something you have to wear every day and are more stable on the temple.

One of the study participants, Albert Jacobs, who works at the Herman Ostrow School of Dentistry of USC, received his Level glasses at the event and said, “I have a keen interest in wearable technology but I don’t like wearing ‘jewelry’ or things on my wrist so finally with something incorporated into my glasses— this is exactly what I was looking for. I love tracking my health and while my phone does a great job I feel like sometimes it’s not as accurate so when I heard about this Level program I thought ‘This is perfect.’ ”

Chiu added the USC study participants were enthusiastic in choosing their frames among three unisex styles named after some of history’s greatest innovators, including Nikola Tesla, Marvin Minsky and Hedy Lamarr. She said the Minsky style appeared to be the most popular choice.

In 2015, VSP Global and USC Center for Body Computing formed a partnership to harness the multidisciplinary experts in digital health technology and medicine/science to collaborate with The Shop on Level (then known as Project Genesis) to engineer the future versions of the frame and evolve the platform. The USC study is the first step in an ongoing partnership between USC CBC and VSP Global.

Founded in 2007 as one of the nation’s first digital health innovation centers, the USC CBC functions as an interdisciplinary brain trust and innovation center within the Keck Medicine of USC medical enterprise. Member organizations are given access to experts in medicine, business, engineering and entertainment to better navigate the complex and evolving world of wireless and wearable health care.