USC leaders celebrated in August the opening of a new, resort-style residence hall on the Health Sciences Campus.

The Malcolm and Barbara Currie Residence Hall can house up to 456 students in a modern, spacious complex with 178 apartments, a fitness center, swimming pool, barbecues and an “academic success center” with computers, printers and two study rooms. Medical students living on the Health Sciences Campus were previously limited to the 90-bed Seaver Residence Hall. 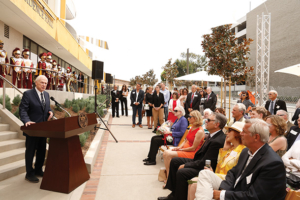 Malcolm Currie speaks during a ribbon-cutting ceremony for the new residence hall named in his honor, held Aug. 25 on the Health Sciences Campus. (Photo/Steve Cohn)

USC President C. L. Max Nikias, PhD, commended Malcolm and Barbara Currie for their steadfast support to the university, as well as their visionary philanthropy. The residence hall is named in recognition of their investment in the university’s biomedical research and education. The Curries gave $10 million in 2015 toward the endowment of the Keck School of Medicine of USC and construction of the USC Michelson Center for Convergent Bioscience.

“The Curries, in fact, have long believed in the soaring possibilities that come when science and engineering join forces,” he said. “Lives can be improved; lives can be saved; lives can be transformed. That is why USC made a dedicated choice to build at this campus, where we are investing not only in the future — not only in our students — but in this community.”

Keck School of Medicine Interim Dean and Director of the USC Gayle and Edward Roski Eye Institute, Rohit Varma, MD, MPH, described the opening of Currie Hall as a “historic moment” for the school.

“The life of a medical student is relentlessly challenging and demanding,” he said. “We have always been there for our students and today we take a momentous step forward towards that effort.”

Varma and Nikias were joined at the celebration by Malcolm and Barbara Currie; Provost and Senior Vice President for Academic Affairs Michael Quick, PhD; Keck Medicine of USC CEO Tom Jackiewicz, MPH; Chief Medical Officer of Keck Medicine of USC and the Associate Dean for Clinical Affairs for the Keck School of Medicine Stephanie Hall, MD; and John Mork, chairman of the USC Board of Trustees. 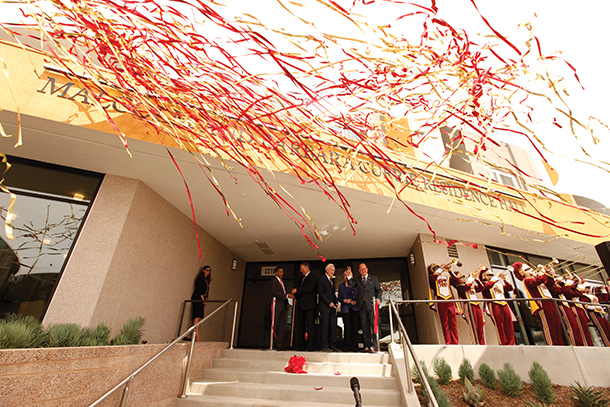