Kathy Nguyen, 47, broke into tears of joy as she crossed the finish line of the grueling Arizona Ironman on Nov. 21, with a personal best time of just under 14 hours. Her former doctor, Keck Medicine of USC neurosurgeon Jonathan Russin, MD, followed 18 minutes later. 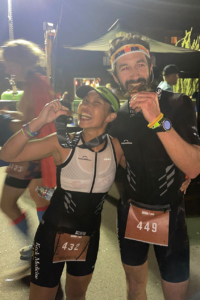 “It was like a dream,” Nguyen said. “I am just so proud of both of us and what we did.”

The achievement of completing a 2.4-mile swim, 112-mile bike ride and 26.2-mile marathon under a hot desert sun was the pinnacle of a journey both embarked upon six years ago, forged by a dramatic life-saving surgery.

In 2015, Nguyen, a mother of twins from Newark, Delaware, suffered a ruptured brain aneurysm while vacationing in Los Angeles. Until she was transferred to Keck Hospital of USC, doctors were unable to determine what was wrong with her.

Here, she came under the care of Russin, an assistant professor of clinical neurological surgery at the Keck School of Medicine of USC, and William Mack, MD, professor of neurological surgey (clinical scholar) at the Keck School, who diagnosed the problem. Russin performed a rare procedure only a handful of medical centers can perform that ensured the proper blood flow to the brainstem while preventing additional bleeding.

Nguyen made a full recovery with the strong support from her surgeons and the entire treatment team. 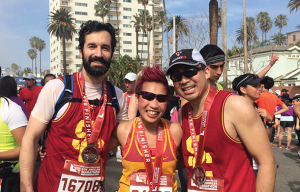 A serious runner with nine marathons under her belt, she was eager to return to the sport she loved. Less than a year later, after rigorous training to regain both her physical and mental strength, she ran the Los Angeles Marathon in her “comeback” race. She was joined by several Keck Medicine staff, including Russin, all running their first marathon.

Since then, Nguyen and Russin have reunited annually to run the Los Angeles Marathon.

“I was willingly sucked into her whirlwind of energy,” Russin said. For Nguyen, going back to Los Angeles each year became a symbol of her survival.

Along the way, Nguyen used the marathon as a platform to raise more than $63,000 for brain aneurysm research at Keck Medicine.

For 2021, six years after the surgery, Nguyen and Russin agreed to up their game. A sixth anniversary is known as an “iron anniversary,” so they decided to compete in an Ironman competition, her second and his first.

Although separated by some 3,000 miles, they trained “together” via encouraging texts and were able to meet once in Los Angeles for a training session before the competition.

At the Arizona Ironman, they started the course together at the swim portion of the competition in the chilly Tempe Town Lake, and ended it with a celebratory hug at the marathon finish line, exhausted yet exultant. Nguyen beat her previous Ironman time, which she competed in before the aneurysm, by 90 minutes. 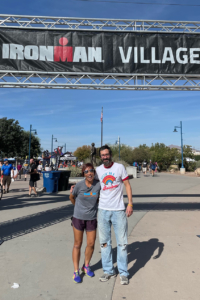 Kathy Nguyen and Jonathan Russin pose under the Ironman sign ahead of the Nov. 21 competition. (Photo/Courtesy Kathy Nguyen)

Throughout the years, both Nguyen and Russin say that their physician-patient relationship has been incredibly rewarding.

“Kathy is such an inspiration, it helps me feel inspired in my work,” Russin said. “She’s also pushed me as an athlete. And it’s been a joy to get to know her and her family.”

Nguyen feels meeting Russin is “kismet.” “Not only was I in the right place at the right time, and had my life saved, Dr. Russin and I are wired the same way — when we see a way to make a difference, we do it,” she said.

Nguyen continues to show her gratitude for Keck Medicine through her yearly fundraising efforts, raising so far more than $43,000 out of a $50,000 annual goal this year. She also gives back to the larger community through her nonprofit, werunwithyou.org, to support others with traumatic brain injuries. For his part, Russin supports her work not only by being her competition partner but by being available to counsel those she meets who need his compassionate, expert advice.

As for the future, “I’ll keep going as long as Nguyen does,” Russin said. Up next: they’ve already registered for the 2022 Los Angeles Marathon on March 20.