Music to Remember, a program that ZNI and the LA Opera started in 2012, sends trained vocalists to sing holiday songs at long-term care and assisted living facilities in the Los Angeles area. Other partners include the Alzheimer’s Association.

“Music is the universal language that enables us to express how we feel,” said Berislav Zlokovic, director of ZNI and holder of the Mary Hayley and Selim Zilkha Chair in Alzheimer’s Disease Research at the Keck School of Medicine of USC. “There have been some studies about the effect of music on Alzheimer’s, but I don’t think there is a definitive study.”

This year, a group of LA Opera vocalists will sing at 13 hospitals, long-term care or assisted living facilities over five days. Holiday music is ubiquitous in December in the United States. Thus, the aim of Music to Remember is to tap into memories associated with these festive tunes.

“In the course of even 45 minutes of music, you see a calm going over someone who is very disconnected or who may be very agitated,” said Stacy Brightman, a spokeswoman for the LA Opera. “Someone who was only looking down will start to look up with a focus. We’ve even seen foot tapping and tears.” 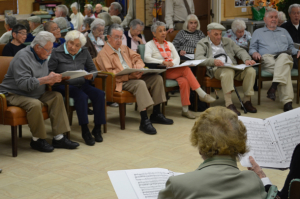 Although Music to Remember started three years ago, LA Opera has been singing to children in hospitals and to the elderly for the past six years, Brightman said. The seasonal concerts are part of a movement toward total patient care, she said.

“You can’t separate someone’s spirit and soul from their mind,” Brightman said. “Holiday music is some of your earliest memories, and that’s the key to Alzheimer’s. You remember the things you learned when you were very young.”

The Alzheimer Disease Research Center at the Keck School and the Alzheimer’s Association, California Southland chapter, are also part of the collaborative effort.

“Music in general has a transformative effect on people with dementia because it corresponds with certain parts of their life,” said Ayesha Dixon, who manages the Alzheimer’s Association’s Memory Mornings in Los Angeles. “Music makes them feel connected to a time period or a memory associated with that song. People with dementia physically react to the music.”