Keck Medicine of USC and Cerner Corporation recently hosted more than 100 nursing leaders from across the country during the 2015 CNO Forum.

Participants received education on industry topics related to nursing and spent time networking with peers during the three-day conference that began March 31 with a welcome reception at the Langham Huntington Hotel in Pasadena.

The next day began with a full slate of presentations in Aresty Auditorium inside Norris Comprehensive Cancer Center, including talks by nursing industry leaders and Cerner executives. Among the speakers was Pamela F. Cipriano, PhD, RN, the president of the American Nurses Association.

“It was an opportunity for us to showcase all the great work being done with our electronic health record and nursing’s involvement,” Sy said.

In the afternoon, nursing leadership from Keck Medicine of USC provided on overview and history of Keck Medicine of USC and discussed the drivers for the decision to move quickly to implement technology that would improve efficiency and safety of practice and drive clinical quality for our patients.

Terry Pickering, MSN, RN, chief of Clinical Applications and associate administrator of Nursing and Clinical Informatics, explained the system, which relies in part upon data input by the nursing staff. He also reviewed some of the challenges that had to be overcome when creating the system and talked participants through the benefits that have resulted from its implementation.

One innovation is a recently unveiled web-based app that presents information about the 24 operating rooms in the Main OR. The app, which was built by Keck Medicine of USC staff based on data from Cerner’s system, allows physicians and staff to view and analyze data related to the performance of their operating rooms and find ways to improve or root out inefficiencies.

After that presentation, the groups split into three groups for a tour of the Health Sciences campus and face-to-face Q&A sessions with Keck Medicine officials. For example, Joshua Lee, MD, chief information officer, showed forum participants how patient data can be input directly by staff members at mobile workstations inside Healthcare Center II.

The CNO Forum wrapped up April 2 with a round of morning sessions on the HSC campus that included a presentation by Mary Dee Hacker, MBA, RN, the chief nursing officer and vice president of patient care services at Children’s Hospital Los Angeles.

Sy was pleased with the forum. “It was a wonderful opportunity to network with other chief nursing officers from across the country to share best practices,” she said. 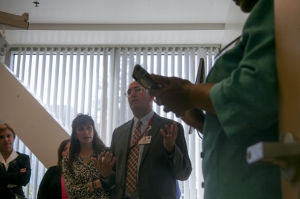 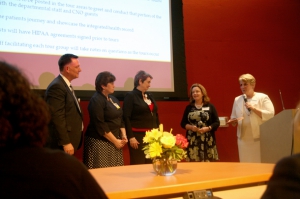 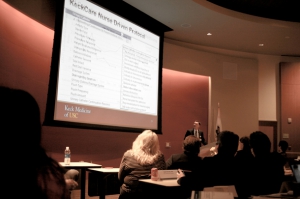 Terry Pickering, chief of Clinical Applications and associate administrator of Nursing and Clinical Informatics, explained how data is being used at Keck Medical Center of USC.