Celebrated Russian poet Yevgeny Yevtushenko recently recited a selection of his work at the 5th Annual Vladimir Zelman Distinguished and Endowed Lectureship presented by the Department of Anesthesiology at Keck School of Medicine of USC and sponsored by the Guilford and Diane Glazer Foundation.

Among Yevtushenko’s readings was the poem Babi Yar, nominated for the 2007 Nobel Prize in literature. Written in 1961, the poem examines the distortion of historical facts by officials in the Soviet Union regarding the Nazi massacre of the Jewish population in Kiev, Ukraine, during WW II.

“Yevgeny Yevtushenko is one of leading dissident poets at the time of the Soviet Union,” said Philip Lumb, MD, professor and chair of anesthesiology, Keck School of Medicine. “He has a great deal of controversy associated with his name.”

They were introduced to the audience in Aresty Auditorium on April 1 by Lumb, who credited Zelman, PhD, MD, professor and co-chair of the Department of Anesthesiology, for his work to attract cultural events that intellectually stimulate students, faculty and staff.

“Dr. Zelman is not only a scientist, but he also believes our campus benefits from cultural activities with significance,” Lumb said. “All the guests who have been invited and accepted to the lecture series have been quite remarkable.”

Yevtushenko published his first book of poetry in 1952 and was featured on the cover of Time magazine 10 years later. He teaches Russian and European poetry, as well as the history of world cinema, at the University of Tulsa and Queens College of the City University of New York. 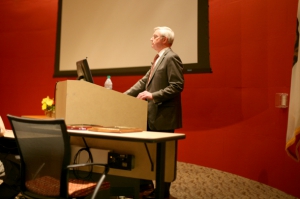 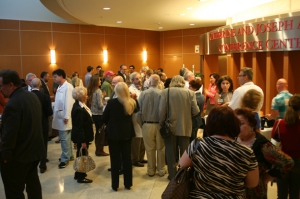 A reception preceded the Vladimir Zelman Distinguished and Endowed Lectureship. 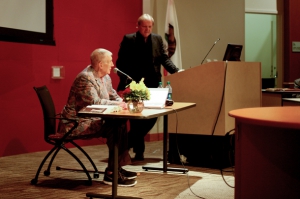 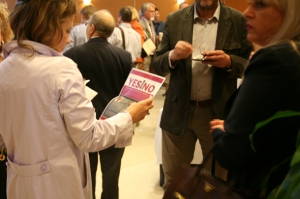 A reception preceded the Vladimir Zelman Distinguished and Endowed Lectureship on April 1.