Keck School of Medicine of USC faculty, staff and supporters gathered to honor the vision of two noted philanthropists recently as university leaders celebrated the $25 million gift from USC Trustee Edward Roski and his wife Gayle to name the USC Gayle and Edward Roski Eye Institute.

More than 200 people attended the April 28 luncheon celebration held at the Harry and Celesta Pappas Quad on the Health Sciences Campus, including USC President C. L. Max Nikias, PhD, who praised the Roskis’ dedication to supporting the groundbreaking research being conducted by pioneering doctors. 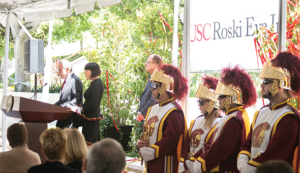 “Their unfettered passion for our university has been as inspiring as it is humbling,” Nikias said. “Family matters to them and that includes the Trojan Family. Sharing their passions, building their dreams and even helping others build dreams, all matter to them. But a dream that can transform the world, that’s irresistible. That dream is the single-minded purpose of the Eye Institute’s pioneering doctors: to eliminate blindness.”

The Roskis, who are major benefactors to USC’s art and design school, as well as athletics and student programs, chose to support the institute after Gayle Roski’s cataract treatment “opened our eyes to new possibilities.”

“We were incredibly impressed with the doctors and staff and we realized we had an opportunity to give a gift to those who can provide the world with the gift of sight,” Edward Roski said. “For us, this is more than just a donation to an institute. It’s an investment in the future and an investment in people, in men and women who will make new discoveries, in experts that will make dynamic advances, and researchers who will help develop new solutions and new innovations.”

USC Roski Eye Institute Director Rohit Varma, MD, MPH, interim dean of the Keck School and president of USC Care Medical Group, gave his thanks to the Roskis and Nikias for their support of the institute. Varma then shared a memory of a visit to Albania several years ago, when he met a man who had lost his vision in an industrial accident and thus had never seen his infant son.

“If I could give him my eyes for some period of time and allow him to see, I would, just so that he could see the face of his baby boy,” said Varma, professor and chair of the department of ophthalmology and holder of the Grace and Emery Beardsley Chair in Ophthalmology. “It was heartbreaking; I could not help him and I wished that I could. Now more than two decades later, I still think of that young man with his beautiful family, and they inspire me just as they inspire many of us who have similar stories. They are reminders of why many of us are in this field of ophthalmology and vision. And to me, that one simple wish of wanting to see, embodies the goal that is part of the Eye Institute: to improve the lives of people with vision loss and restore sight.” 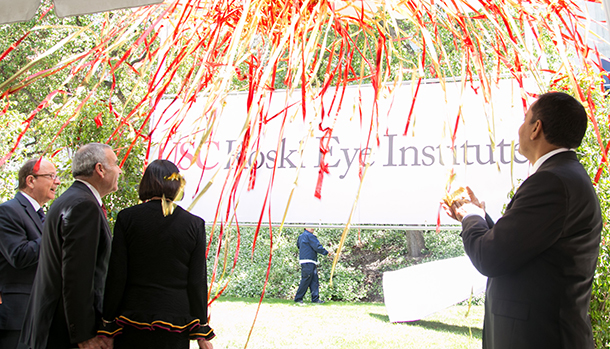