On an ordinary February day, 18-year-old Khashayar Pirouzmand was breezing through the physics questions on an important exam at his high school in Iran, excited because doing well could help him get into a top university.

Two hours in, without warning, his life changed dramatically. Very suddenly, he felt a strange pressure in his brain. He raised his hand and tried to say he wanted to go outside, but couldn’t put the words together. He took a deep breath and glanced at his paper. He could no longer solve the problems he had done only minutes before.

Pirouzmand left the classroom with the test unfinished. By the time he reached home a half hour later, he could speak again. He told his family something had happened to him, but he didn’t think it was serious. He chalked up the incident to the stressful exam.

The second time, about two months later, he was talking to his aunt when he heard a high tone in his ear, felt pain in his jaw and passed out. He woke up in an ambulance. After tests at a local hospital, doctors gave Pirouzmand the news: He had epilepsy, most likely caused by a small tumor on the left side of his brain.

Worldwide, 50 million people are diagnosed with epilepsy. One of the most common neurological disorders, it is characterized by unpredictable electrical activity in the brain and recurrent seizures.

Doctors believed Pirouzmand’s tumor was too close to the language areas of his brain to operate, so he began taking two anti-seizure medications. They didn’t stop his seizures, which started escalating. Each time, he lost the ability to put words together or make sense of them. He tried finishing his university entrance exam, but couldn’t.

The next year, his seizures again kept him from completing the exam. Pirouzmand’s dream of traveling to America to study engineering seemed nearly impossible.

Little did he know that in a few years, Pirouzmand would find himself at the USC Comprehensive Epilepsy Center, designated a level 4 center by the National Association of Epilepsy Centers. The highest accreditation possible, this distinction indicates the center’s capability to treat the most complex cases.

When he finally arrived in Los Angeles two years ago, he saw a community physician for his epilepsy prescriptions who recommended he go to Keck Medicine of USC for help.

Within the USC Comprehensive Epilepsy Center, a multidisciplinary medical team provides the most advanced care for patients with complex issues, including those who experience uncontrolled seizures, severe side effects from medication or who want to get pregnant while having epilepsy.

“Patients come to us because they need a higher level of care,” noted Christi Heck, MD, medical director of the center and professor of clinical neurology at the Keck School of Medicine of USC.

That level of specialty is necessary because epilepsy can be extremely challenging to diagnose and treat, in part because it has a wide range of potential causes, including genetics, prenatal injury, meningitis, strokes, tumors and traumatic brain injury.

More people die of epilepsy (50,000) each year than from breast cancer (40,000). This includes people who develop SUDEP or “sudden unexpected death in epilepsy,” as well as those who die from seizure-related drownings or burns. Pirouzmand initially met with George Nune, MD, assistant professor of clinical neurology at the Keck School. Nune changed Pirouzmand’s medications to see if that would halt the seizures.

“Approximately one-third of patients have medically refractory epilepsy, which can’t be controlled with medication,” Nune said.

Nune asked Pirouzmand if he was interested in surgery, which held the potential to remove the source of his epileptic seizures. “I was very excited,” Pirouzmand said. “It seemed like an adventure for me. I wanted to try it.”

Listening to the brain 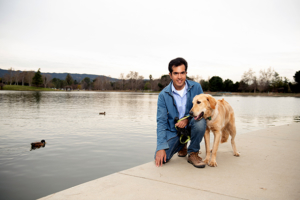 The first step: capturing the electrical impulses in Pirouzmand’s brain. The center is equipped with the most advanced imaging and diagnostic technologies, including video electroencephalographic monitoring (EEG), an invaluable tool to diagnose epilepsy symptoms, using non-invasive electrodes attached to the head.

Pirouzmand spent a week in Keck Hospital of USC, as his medical team gradually withdrew him from all medication to trigger and track his seizures. This would enable them to characterize what type of seizures he was having and where they originated within the brain.

Jonathan Russin, MD, assistant professor of clinical neurological surgery at the Keck School, likens the on-the-scalp video EEG to “trying to listen to a conversation through a wall.”

Nune and Russin escalated the testing to the next level: phase II intracranial EEG monitoring to more accurately locate the area where seizures began and those areas that are essential for speech production. This higher-level brain mapping is like “being inside the room listening to the conversation,” Russin said.

Russin implanted a very thin mesh of electrodes over the surface of the brain in the relevant region. His typical seizures were then recorded over the course of several days as Pirouzmand dutifully did physics homework and watched documentaries in the intensive care unit (ICU). Nune then electrically stimulated the various brain areas under this mesh to determine which disrupted the ability to speak in his native Farsi. These would have to be preserved during surgery.

Pinpointing the area responsible for language as accurately as possible for each individual is essential “because once patients have been having seizures for so long, their brain often has reorganized itself,” Russin noted.

Armed with the results, Russin could proceed. His goal was to remove as much of Pirouzmand’s tumor as possible, while avoiding delicate tissue.

“You’re talking about potentially curing somebody of their seizures and changing the trajectory of their life,” he said. “If our patients have the courage to undergo these procedures, it’s our responsibility to do the job right with the least amount of risk.”

Pirouzmand was more than ready. “I said, ‘Let’s go.’ This was my chance to get better.”

Science at its best

For Pirouzmand, surgery gave him his life back. He occasionally hears a high tone in his ear (an “aura” or warning of a potential seizure), but the seizures no longer come. He is on two medications for now, a precaution for the first few years after surgery.

Pirouzmand has started driving again and he is hard at work studying for his university degree. During his treatment at Keck Hospital, he realized the specific field he wants to pursue — electrical engineering. Being in the hospital, with electrodes implanted in his brain, he felt like a living, breathing embodiment of science at its best.

“In one moment, engineering and neuroscience and medical school were all combining to cure the patient — me — of epilepsy,” Pirouzmand said. “It’s kind of amazing.”

To learn more or schedule an appointment, call (800) USC-CARE or visit KeckMedicine.org/epilepsy.