Upon sending the newest group of healers into the world, the final instructions from the leaders of the Keck School of Medicine of USC were not about illnesses or treatments, but compassion, curiosity and humanity.

More than 150 doctor of medicine candidates received their hard-earned diplomas during the May 12 commencement ceremony held at the Galen Center on USC’s University Park Campus, which was the first for the Keck School’s new dean, Laura Mosqueda, MD. The candidates not only celebrated their accomplishments, but also acknowledged the support of friends, family members and mentors who helped make the day a reality. 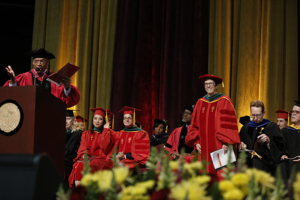 “You are graduating at an auspicious time in the history of medicine. This is a very exciting time to be a physician,” Mosqueda told the new doctors. “It’s exciting to think that you will be solving the health problems that now seem intractable.

“It’s staggering to think of how the practice of medicine has changed in the past few decades, let alone since the first class of nine students who graduated from the USC College of Medicine 130 years ago,” she continued. “Yet as far as our field has come, the promise of greater breakthroughs ahead is even more breathtaking. Combine those things with the dedication, ingenuity, care and compassion that you will undoubtedly bring to the practice of medicine, and the future looks very bright indeed.”

A successful healer requires much more than skills and knowledge, speakers told the Class of 2018. Compassion, insatiable curiosity and the humility to be willing to learn from both colleagues and patients are vital components of a good doctor.

“Never stop learning. Not just about medicine, but about the world around us,” Mosqueda said. “Most of all, learning will come from our patients. These lessons will come, though, only if we listen with an open heart and take time to absorb and incorporate what we’ve learned into our very beings,” she said. 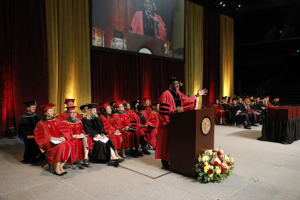 Gary Gibbons gives the commencement address during the 133rd Keck School of Medicine of USC Commencement, held May 12 at the Galen Center. (Photo/Steve Cohn)

In his commencement address, Gary Gibbons, MD, director of the National Heart, Lung, and Blood Institute at the National Institutes of Health, shared stories and anecdotes from his more than 30-year career. He reminded the candidates that, as doctors, they have both the privilege and the responsibility, in some cases, to be the answer to patients’ prayers.

“I’m actually, the more I reflect on it, jealous of you,” he said. “Because you’re about to step out into a world of biomedicine that’s going to be absolutely fabulous. And I wish that I had as much mileage, that I could join you on this incredible journey.

“You are going to transform medicine,” Gibbons said. “It’s going to be an incredible, incredible ride. But I hope that you’ll also seize it with the patient in mind.” 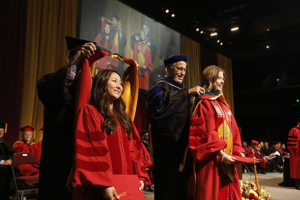 Doctor of Medicine candidates are hooded during the commencement ceremony. (Photo/Steve Cohn)

Quick also used the opportunity to thank all of the faculty for their dedication and acknowledged Commencement Grand Marshal Henri Ford, MD, MHA, who oversaw his last Keck School commencement ceremony before starting on a new chapter of his own as dean of the University of Miami Leonard M. Miller School of Medicine. 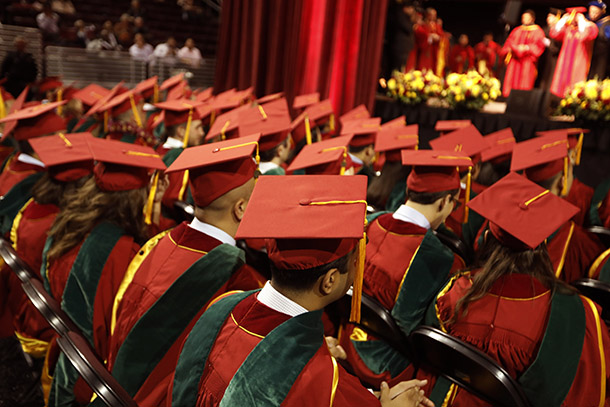 More than 100 Doctor of Medicine candidates received a diploma during the commencement ceremony on May 12. (Photo/Steve Cohn) 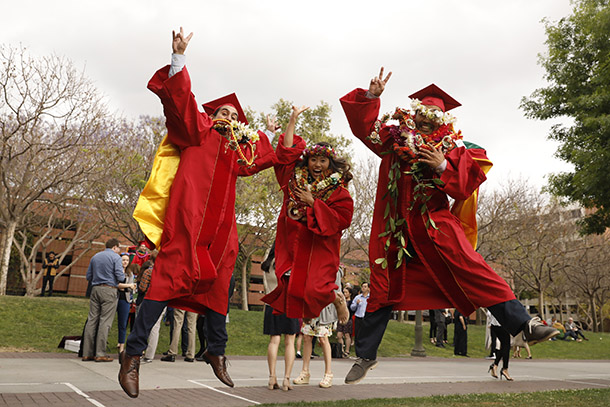 Graduates celebrate at a reception after the commencement ceremony. (Photo/Steve Cohn)