The Keck School of Medicine of USC hosted a conversation with the 20th U.S. Surgeon General, Jerome M. Adams, MD, MPH, on Oct. 10 in Mayer Auditorium for faculty, students and staff. Adams’ enthusiasm for the students was evident as he stopped to take a few photos with eager students as he made his way to the stage for his address.

After an introduction by Donna Elliott, MD, EdD, vice dean for medical education, Adams expressed appreciation for the opportunity to meet face to face with students and residents. An anesthesiologist by training, Adams recalled how much he enjoyed medical school and all the possibilities that it seemed to open up for him. He asked that students be open to change as they begin to think about the specific paths they will take in the medical field. He also asked the students to take a more holistic view on the health of the patient.

“Health is more than health care,” Adams said, before he encouraged students to widen the lens when treating patients by considering the many factors that can contribute to an individual’s health and well-being. 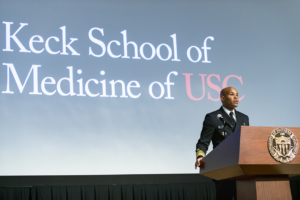 As the “Nation’s Doctor,” Adams’ motto is to create “better health through better partnerships.” Adams spoke at length about his three main priorities as the Surgeon General: to make a connection between a community’s health and economic opportunities; to raise awareness between the link of health and national security; and to focus resources and time on the opioid epidemic that is currently raging across the country.

Adams shared that his focus on the opioid epidemic also was a personal one. His younger brother currently is serving a 10-year prison sentence stemming from acts he committed in order to support his opioid addiction. Adams emphasized that addiction can happen to anyone and that it is a chronic disease that must be treated as such.

He noted that opioid addiction is often shrouded in so much stigma that it widens the gap between the disease and available treatment. He presented two widely available Naloxone options that he encouraged everyone to carry — regardless of one’s role in the medical field. Naloxone is a medication used to block the effects of opioids and works quickly upon either injection or being sprayed into the nose of the person experiencing overdose symptoms. With one person dying from an opioid overdose every 11 minutes in this country, a Naloxone spray or injector potentially could become the most common and effective lifesaving device in America.

During a Q-and-A after the lecture, audience questions ranged from next steps regarding the vaping crisis to more politically driven inquiries regarding Adams’ role in the current administration and its stance on prominent health care issues like gun violence. Adams noted that his primary goal as the Surgeon General is to create an environment in which the best health outcomes could be had by all Americans, regardless of political leaning. Adams also emphasized the importance of diversity and inclusion on driving health care policy changes. He encouraged all students at the Keck School to utilize their positions within health care to advocate for patients.

“You have a powerful voice,” Adams said. “There is nothing more powerful than a physician lending their voice to the issues that really matter.”