A long-running and widely cited USC study on the health effects of pollution on children is exporting its methods to Eastern Africa.

The USC study group, which is based on the Health Science Campus, and Addis Ababa University in Ethiopia have been awarded a $3 million joint grant to develop a regional Global Environmental and Occupational Health (GEOHealth) Hub in Eastern Africa — one of only seven in the world.

This will be the first time scientists continuously record air pollution data to investigate its health effects on children in Ethiopia, Kenya, Rwanda and Uganda, said Kiros Berhane, a USC professor of biostatistics and co-principal investigator of the newly funded international partnership.

This type of study is such a novel idea in Eastern Africa, researchers will need to install air monitoring stations.

USC and Addis Ababa University scientists will study health problems stemming from air pollution, Berhane said. The primary objective is to see if air pollution negatively influences health. If so, the team will collaborate with policymakers to address problem areas.

“When it comes to air pollution, huge emissions from big polluters like China and India are likely to have huge effects on public health everywhere and on our global climate,” said Berhane, who was born in Ethiopia. “These problems are global, so studying things only in the U.S. may not make sense and may not give us a full picture.”

“The levels of air pollution in the Eastern Africa setting are going to be very high compared to even the dirtiest possible community in Southern California,” Berhane said. “So qualitatively what the Eastern African studies could give us is actually a much higher end of pollution compared to anything we have seen in the Southern California study.”

USC researchers hypothesize the percentage of children who are below the healthy lung function threshold will be much higher in Eastern Africa.

“In a way you could extend the pollution branch,” Berhane said. “We still should be able to at least say — if it materializes — that as we go way beyond the levels that we see in Southern California, there is increased risk of children’s respiratory health being compromised.”

Despite recent advances, hazards associated with air pollution, pesticides, mining, workplace risks and other factors continue in many low- and middle-income countries. Regional GEOHealth Hubs will examine how these risks are linked to illness and how to control them.

The study started last month and is set to conclude in August 2020.

In the first year, experts at USC, the South Coast Air Quality Management District and the University of Wisconsin-Madison will train an inaugural Eastern Africa cohort of lead scientists how to conduct research, including setting up air quality monitoring stations and collecting respiratory health data.

Scientists in Eastern Africa will also learn how to translate findings into policies. These trainees will lead the hub’s research activities in their respective countries.

The Eastern Africa Children’s Health Study, which will begin in year two, will look at the impact of air pollution on the respiratory health of 9- to 10-year-old students in Ethiopia, Kenya, Rwanda and Uganda — 4,000 children in all. This approach resembles that of the initial USC Children’s Health Study, which began as a one-off query and concluded as a longitudinal study lasting 21 years.

By the hub’s final year, a dozen lead scientists will be trained to continue their work as new leaders in GEOHealth research. The goal is for the Eastern African hubs to be self-sustainable and to extend its capabilities into other countries in the region.

About a quarter of global disease burden may be avoidable if existing environmental health interventions and strategies were used, according to the World Health Organization.

“We recognize that governments are hamstrung by a lack of resources,” said Jonathan Samet, chair of the Department of Preventive Medicine, director of the Institute for Global Health and a co-principal investigator of the GEOHealth Hub. “We hope to develop clear evidence that will motivate policymakers to take action to protect their populations.”

Other international hubs in India, Bangladesh, Southeast Asia, the Caribbean, South America and West Africa will address GEOHealth topics focused on the most pressing challenges in that region. In Eastern Africa, air pollution is one of the biggest concerns, according to the GEOHealth Hub’s initial assessment.

The National Institutes of Health’s Fogarty International Center, the National Institute of Environmental Health Sciences, the Centers for Disease Control and Prevention, and Canada’s International Development Research Centre awarded the five-year, $3 million grant on Sept. 28 to a team comprising the USC Institute for Global Health, the USC Department of Preventive Medicine and the Addis Ababa University School of Public Health.

“I don’t think these studies in Eastern Africa would have been possible without the experience that we have gained in the USC Children’s Health Study,” Berhane said. “We have the technical expertise to do it and we have able partners on the other side able to carry this with us.”

The award follows a three-year planning grant USC received to explore the development of an Eastern Africa GEOHealth Hub. 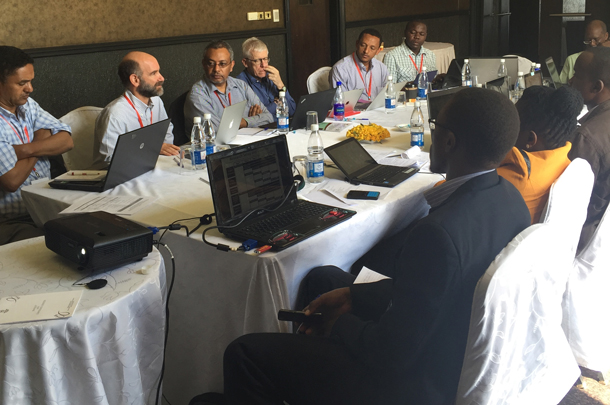 USC investigators meet with the Africa delegation regarding the air pollution study in Kampala, Uganda, in April of this year. Jonathan Samet, chair of preventive medicine at the Keck School of Medicine of USC and director of the USC Institute for Global Health, is third from the right on the far side of the table.