Survivors, loved ones celebrate at Festival of Life

They came together to celebrate survival in the face of fear and uncertainty.

For the hundreds of cancer survivors who gathered at the Keck Medical Center of USC on a recent Saturday morning, the Festival of Life was more than that: It was a celebration of hope, perseverance and a new year of living each day to the fullest.

“Cancer gives you a real appreciation for what life is really all about,” said emcee Art Ulene, MD, a USC Norris Comprehensive Cancer Center advisory board member and former “Today Show” medical correspondent.

The June 6 event marked the 25th annual Festival of Life, an event honoring cancer survivors and their loved ones.

Ulene, who went through his own cancer scare, hosts the festival each year. He urged cancer survivors and their loved ones to appreciate their lives and strive to make each day a new beginning.

“We often take so much for granted, like life itself,” Ulene said to attendees during a ceremony featuring guest speakers, live music and a magician. “So every morning when you wake up, remember this day and live your life really well.”

The Festival of Life is hosted by the USC Norris Comprehensive Cancer Center and is held every June in the Harry and Celesta Pappas Quad in conjunction with National Cancer Survivors Day. This year’s event featured about 750 cancer survivors and family members, 100 white doves, 50 volunteers, a six-member brass band and an andalusian horse (and USC mascot) named Traveler.

The event serves as an opportunity for current and former USC Norris patients to celebrate life and catch up with physicians, nurses and staff who joined them on the journey through cancer treatment and recovery.

Attendee Raphael Martinez was diagnosed with colon cancer 12 years ago and treated at USC Norris.

“I’m here to celebrate life,” said Martinez, who attends the festival each year. “I look forward to the opportunity to come back to USC and celebrate with my family and other survivors.”

Attendees, many wearing blue flower leis, sipped coffee and chatted as they strolled through the quad, stopping by information booths from organizations such as the American Cancer Society and Cancer Support Community in Pasadena. Many attendees posed for pictures with Traveler, the USC mascot, as the sounds of the Bayou Brass Band echoed across campus.

Also on hand was Alex Morrison, who was diagnosed with prostate cancer in 1987 and celebrated his 92nd birthday on June 5. Along with the care he received by USC Norris physicians, Morrison attributed his longevity to an active life and a positive attitude.

“At the time, I looked at the diagnosis like there was not much I could do about it and I accepted it,” said Morrison, an Eagle Rock resident and USC alum (’49). “I learned that no matter where you are in life, you can always use some help. Today I feel great.”

There are 14.5 million cancer survivors in the United States — a number that is expected to climb to almost 19 million by 2024, according to the American Cancer Society.

Gordon Case, who was diagnosed with prostate cancer in 1998, has attended the Festival of Life with his wife, Amaryllis, for the past 12 years. Together, they make the eight-hour drive each June from Yuba City in Northern California to the Health Sciences Campus to visit with USC Norris staff members and other cancer survivors.

“The physicians and nurses here truly did save my life,” Case said, adding that he was able to see the birth of his eight grandchildren after receiving treatment. “Everybody here today has had the same experience. We don’t have to tell our stories, because we just know. It’s truly like being a part of another family.”

The ceremony concluded with a release of 100 white doves. As the birds soared, dark gray clouds began to make way for blue skies.

One of the featured speakers was Rick Huff, who received a diagnosis of prostate cancer two years ago. He shared his journey with those in attendance, adding that thanks in part to the care he received at USC Norris, he was able to witness the birth of his first grandson 21 months ago.

“God had another plan for me,” said Huff, who credited his family, friends and faith for helping him on his cancer journey. “I think that plan was to be here to watch my grandson grow.”

Huff told the crowd: “A cancer diagnosis is scary. But when you have positive people to surround yourself with, the journey becomes much easier.” 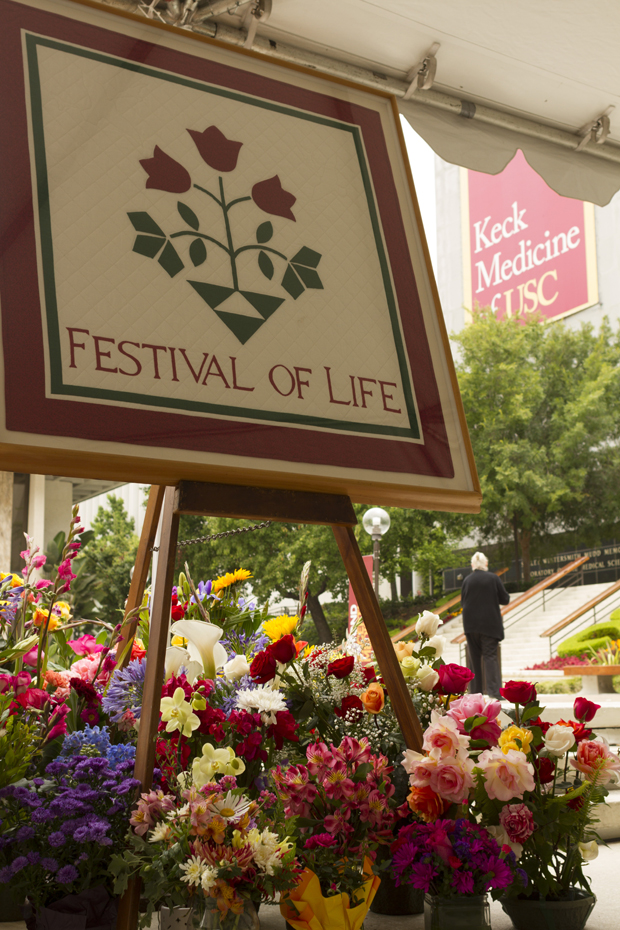 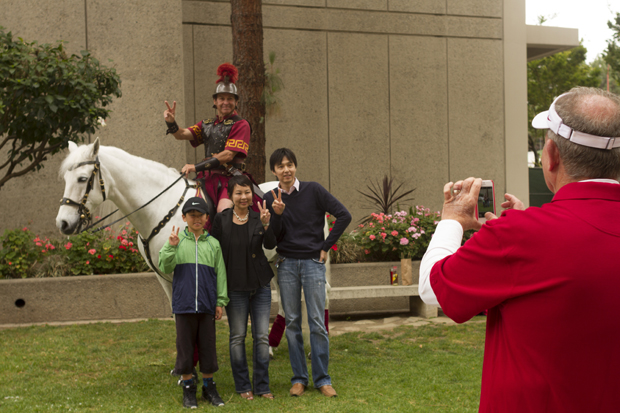 Cancer survivor Teruko Kawada pauses with son Klas and husband Nori for a photo with USC mascot Traveler during the 2015 Festival of Life. 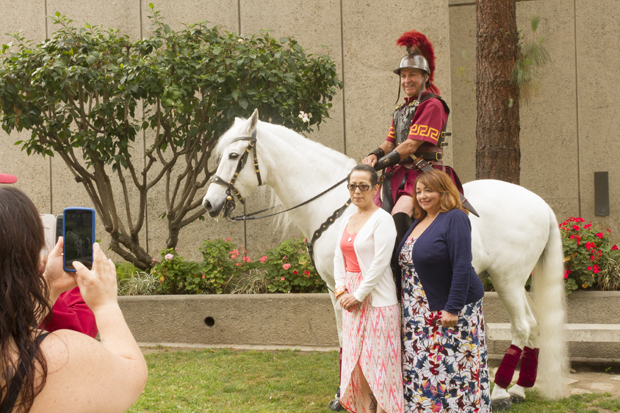 Laura Rojas and Ruthi Lucero pose with USC mascot Traveler and Tommy Trojan as Gloria Gonzales snaps a cellphone photo during the 2015 Festival of Life. 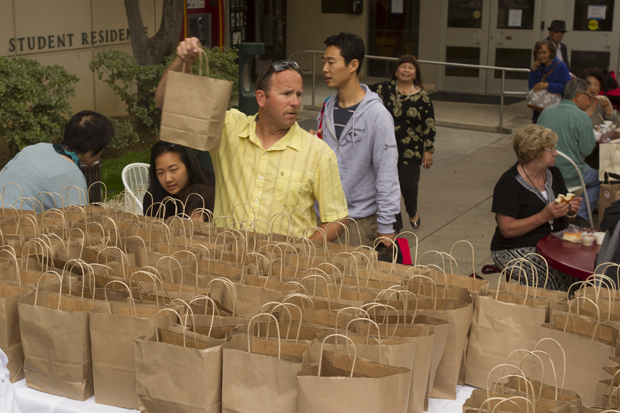 A light snack of bagels and fruit was made available to everyone who attended the June 6 Festival of Life on the Harry and Celesta Pappas Quad at Keck Medicine of USC. 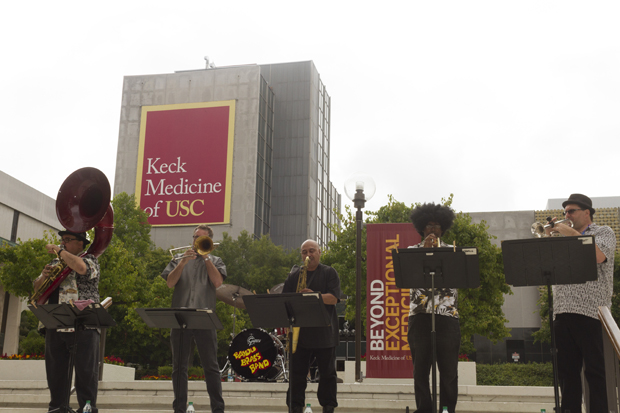 Dixieland jazz music by the Bayou Brass Band provided an upbeat ambiance to the gathering on Pappas Quad during the 2015 Festival of Life. 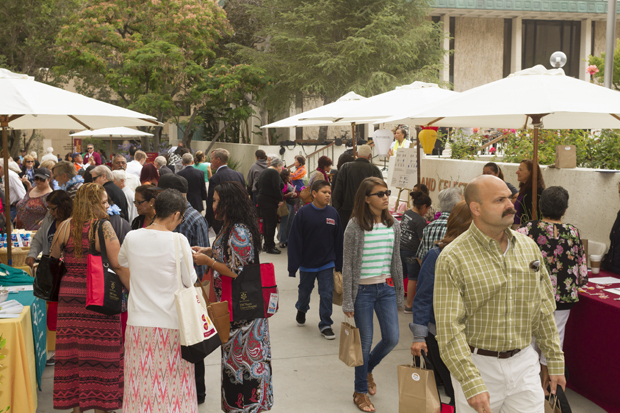 Numerous booths provided resources about cancer during the 2015 Festival of Life. 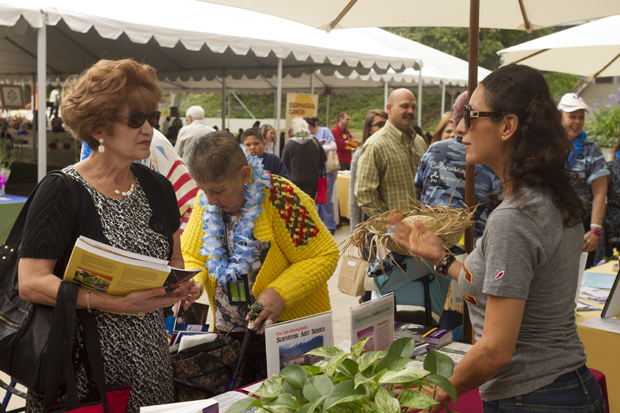 Elena Nieves, a cancer clinical trial recruitment specialist, talks with a Festival of Life attendee who stopped by the booth for the Jennifer Diamond Cancer Resource Library at USC Norris Comprehensive Cancer Center. 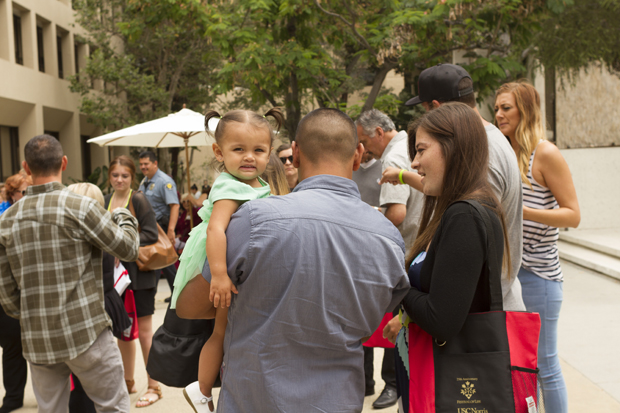 The 2015 Festival of Life was a celebration for all ages. 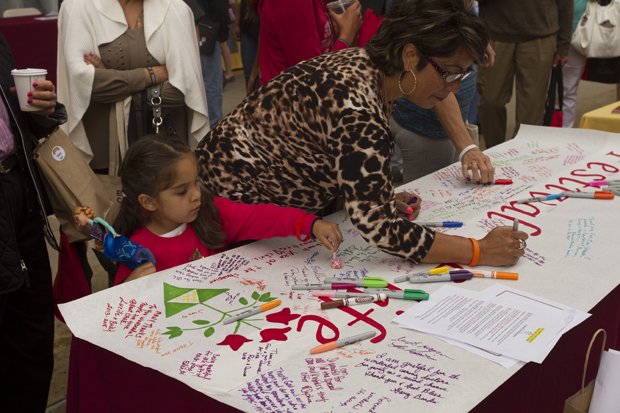 As Joan Silver adds her message to the banner memorializing tales of survival at the Festival of Life, Kia McNaughton plays along. 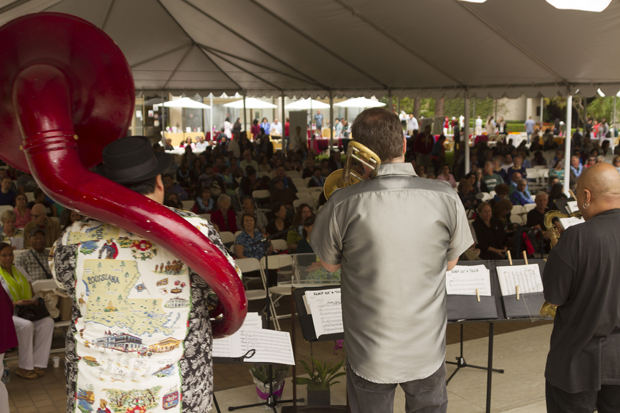 The Bayou Brass Band plays as attendees gather for the formal presentations during the Festival of Life. 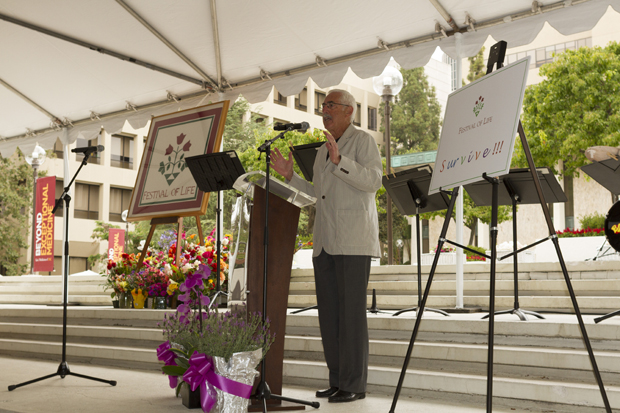 Art Ulene, MD, former medical correspondent for the “Today” show, again served as the emcee of the 2015 Festival of Life. 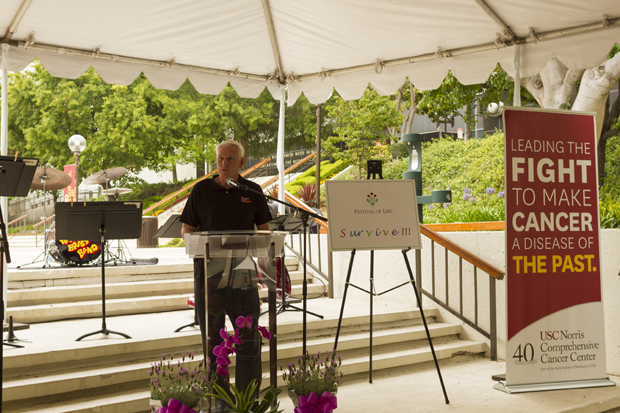 Cancer survivor Rick Huff talks about his experiences during the Festival of Life. 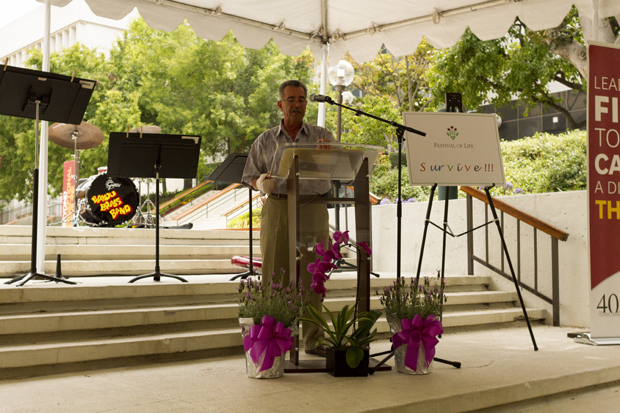 Joe Amaral tells his story of recovery from esophageal cancer during the 2015 Festival of Life. 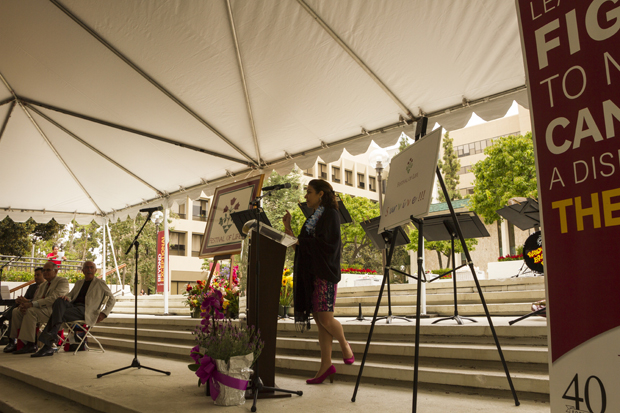 Afsaneh Barzi, MD, offers words of encouragement during the 2015 Festival of Life. 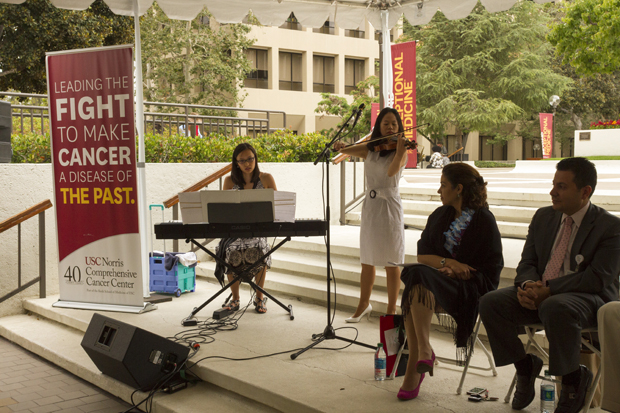 Two doctors provided special music during the 2015 Festival of Life. Christina To, MD, a fellow in hematology/oncology, plays the violin, as Shelly Bian, MD, a resident physician in radiation/oncology, accompanies her on keyboards. 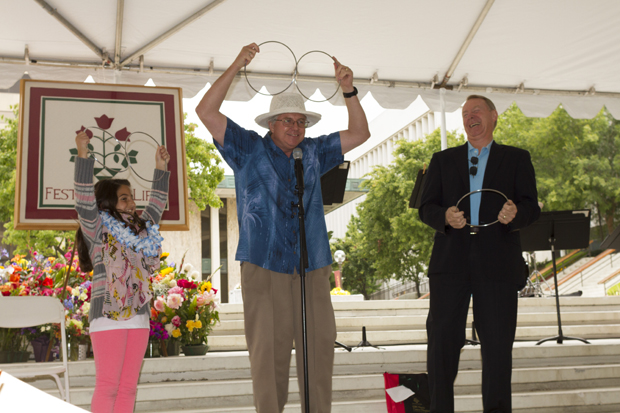 Magician Harvey Simpson entertains the crowd during the 2015 Festival of Life. 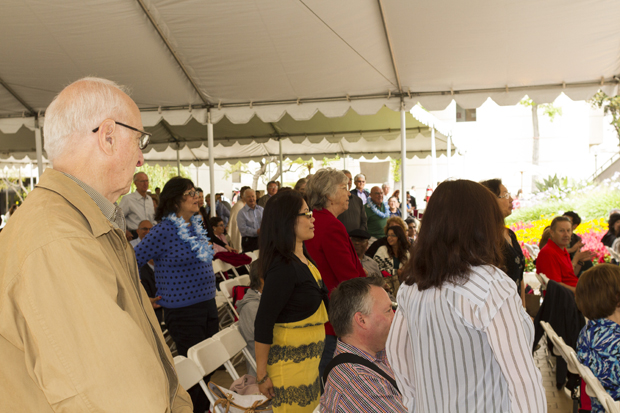 Cancer survivors stand in recognition during the 2015 Festival of Life. 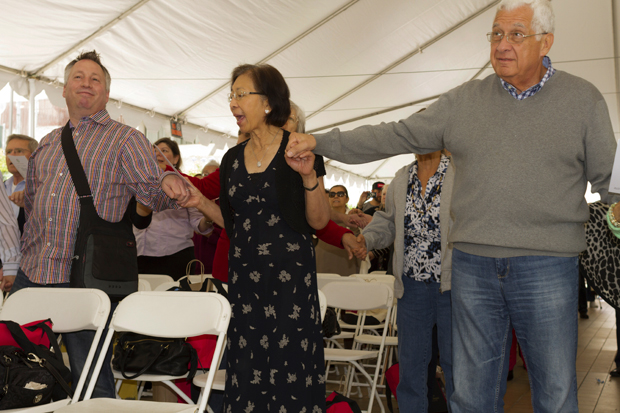 Attendees join hands to recite a message of hope and gratitude during the 2015 Festival of Life. 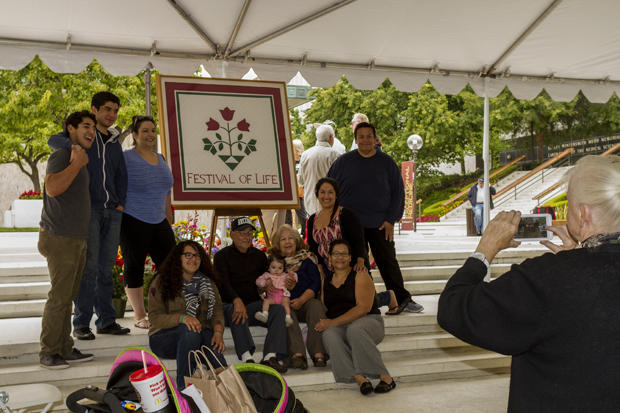 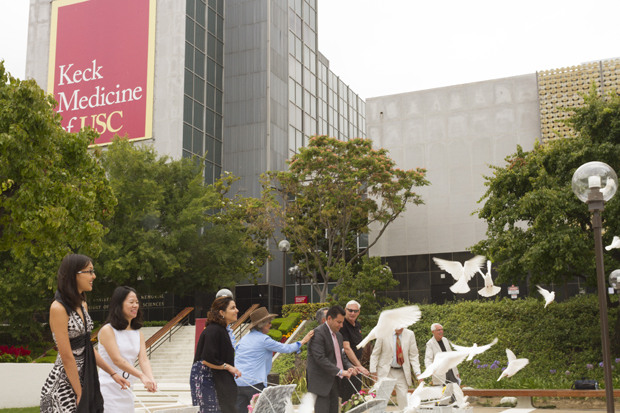 The event traditionally ends with the release of white doves. 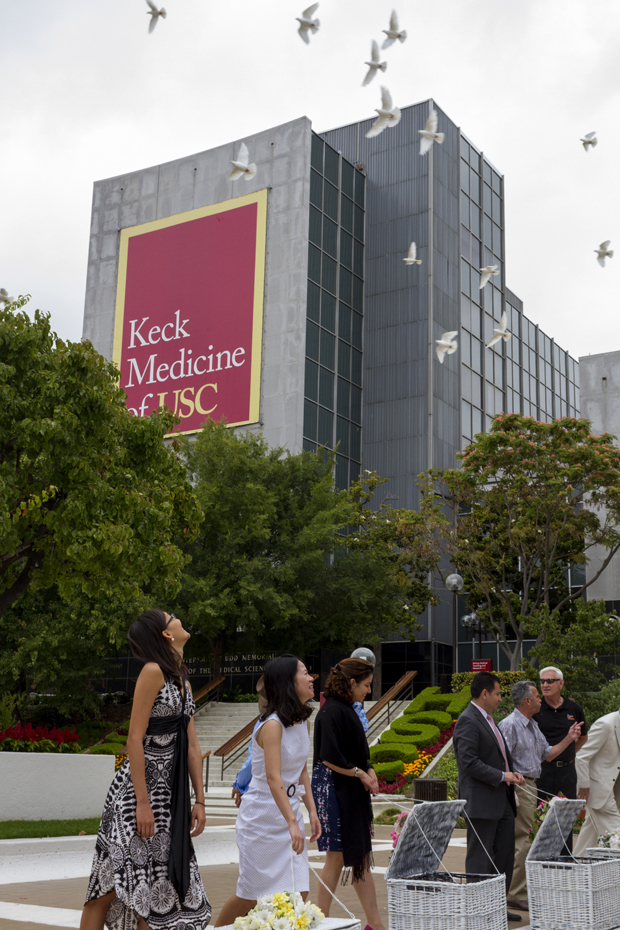 The release of 100 doves signifies the message of hope and survival at the 2015 Festival of Life.