Each year, more than 1 million Americans are diagnosed with adult-onset diabetes mellitus, also known as Type 2 diabetes. The new diagnosis comes with a long list of potential complications: high blood pressure, nerve damage, kidney disease, stroke, glaucoma and more. But for African Americans and Latinos, a diagnosis of diabetes after age 50 also may come with a more than threefold risk for developing pancreatic cancer, according to a new study led by the Keck School of Medicine of USC published June 17 in the Journal of the National Cancer Institute. 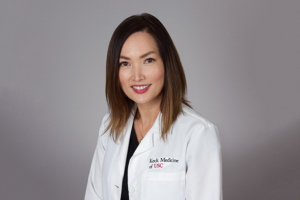 “There are very few studies on diabetes and pancreatic cancer that include Latinos and African Americans,” said the study’s lead author V. Wendy Setiawan, PhD, associate professor of preventive medicine at the Keck School. “Both groups have a high rate of diabetes and African Americans, in particular, have a higher risk of developing pancreatic cancer relative to other racial/ethnic groups. Because most people with pancreatic cancer are diagnosed at a late stage, the five-year survival rate is low — about 8 percent. Identifying people who are at high risk early on could potentially save their lives.”

Symptoms of pancreatic cancer typically present when the disease is in its later stages and no screening methods currently exist.

The research team also looked at whether late-onset diabetes was associated with breast, prostate or colorectal cancer, and no association was found.

Late-onset diabetes may be a useful marker for pancreatic cancer, she added, providing an opportunity to screen high-risk groups with new tools such as liquid biopsy, which is a test that looks for cancer cells or DNA from cancer cells in the blood.

“Pancreatic cancer is a rare disease, but if you are diagnosed with late-onset diabetes, have a conversation with your clinician about your individual risk,” Setiawan said. “Early intervention could improve survival.”