A former patient at the University of Southern California (USC) Comprehensive Stroke and Cerebrovascular Center at Keck Medicine of USC ran the Los Angeles Marathon on Feb. 14, accompanied by the treatment team that saved her life.

Prior to her stroke, 41-year-old Kathy Nguyen had nine marathons under her belt. In March 2015, Nguyen collapsed at a family brunch and was taken via ambulance to a local emergency room. Her doctors determined she had serious bleeding in her brain, but could not determine the source of the bleed.

“The bleed was so severe that the neurosurgeon told my family I would be lucky to wake up,” Nguyen recounted.

Nguyen was transferred to Keck Medical Center of USC for evaluation by their comprehensive cerebrovascular stroke team. A CAT scan helped William Mack, MD, associate professor of neurological surgery, find the aneurysm causing the bleed. He quickly recognized the complexity of the problem. 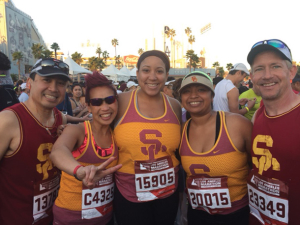 From left, Robby and Kathy Nguyen warm up at the starting line of the 2016 Skechers Performance Los Angeles Marathon with Cherise Lathan, Valerie Sanchez and Steve Blazier. (Courtesy/Kathy Nguyen)

“There was a ruptured aneurysm that involved the entire left vertebral artery, including the posterior inferior cerebellar artery (PICA), which provides blood to part of the patient’s brainstem,” said Jonathan Russin, MD, associate surgical director at the USC Neurorestoration Center. “Cutting off the blood supply to the artery would also cut off blood to the brainstem, causing brain damage or even death. “

Russin performed a PICA-PICA bypass, which involves suturing the right and left PICAs together to ensure proper blood flow to the brainstem while preventing additional bleeding from the aneurysm. The USC Stroke Center is one of a handful in the country that can perform this rare procedure. Immediately following the bypass, Mack and his team blocked the vertebral artery and the aneurysm through endovascular coiling.

On Friday, March 13, Nguyen woke up. “Friday the 13th has always been my lucky day,” she said. “My twins were born on that day.”

Nguyen made a remarkable recovery with strong support from her treatment team.

“Kathy’s motivation and commitment to physical fitness enabled her to engage in high-intensity activities soon after her surgery,” said Cherise Lathan, PT, DPT, physical therapist at Keck Medical Center. “There are not many patients that I can push to do circuit training after a stroke. But her spirit inspired me to push myself and join her for her comeback race.”

Nguyen recruited Lathan, Russin, Joseph Hendrix, physician assistant at the neurosciences clinic, Valerie Sanchez, administrative assistant, and Chris Sickels, development officer to run by her side. It was the first marathon for all of them.

Nguyen also raised more than $4,800 for the USC Stroke Center.

“In addition to raising awareness for brain aneurysm research, I wanted thank my treatment team, especially all the nurses at 7 South ICU. I wouldn’t be here if it weren’t for them.”