Patient gets back in saddle with help from surgical team

Diana Hyde knew she didn’t want amputation. But that’s all anyone was offering her.

Hyde had been active all her life. She had been riding, training and raising horses since childhood and enjoyed camping and trail riding for weeks at a time. It was on her favorite annual camping trip that Hyde realized the shortness of breath she had been experiencing might be something serious. After she was diagnosed with leaking heart valves, Hyde had surgery at a hospital in her home state of New Mexico in the spring of 2017. But that started a whole new round of troubles.

What her doctors believed was a shower of cholesterol particles dislodged by her valve surgery entered Hyde’s bloodstream and spread out through her whole system. She had huge floaters in her field of vision, her fingers darkened from lack of circulation, and her liver and kidneys were affected. The rest traveled down to her lower legs and blocked the circulation to her feet. The skin blackened and gangrene set in.

“It was devastating,” Hyde said. She and her son Chris Bailey sent pictures and queries to every hospital in New Mexico, and then to hospitals in neighboring states. Hyde sent e-mails all over the country. Everyone offered the same thing: below-the-knee amputations for both legs. 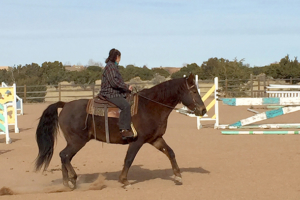 “It was very exciting,” Hyde said. “Dr. Armstrong is such an uplifting person.”

It was exciting for the surgical team too. Armstrong had just joined the Keck Medicine of USC division of vascular surgery and endovascular therapy in August of 2017. He is the founder and co-director of the Southwestern Academic Limb Salvage Alliance (SALSA), of which USC is now a hub. With the rest of the division, he intends to eliminate preventable amputations within a generation.

“The easiest thing to do in a lot of cases is to cut off a limb,” Armstrong explained. “And in some cases, it’s the right thing to do. But there are plenty for whom it’s a profound and life-changing loss. For someone as active as Ms. Hyde, it could have been disastrous.”

Patel agreed. “She’s super active, so that was important for her. With a bilateral below-the-knee amputation, you have to completely re-learn to walk, re-learn your coordination, even get used to a new limb length. You can lose a lot of meaningful functionality — even the basics, like going to the store.”

Armstrong and Patel performed a series of complex surgeries, saving Hyde’s lower legs and half of each foot and transplanting tissue from Hyde’s thighs to cover the remaining portion.

“This was a marriage of team, technology, and tenacity,” Armstrong said afterward. “There are few if any other place in the world that can do the things our team is doing right now… But a lot of the credit goes to Ms. Hyde. She absolutely refused to give up. I think that speaks to her recovery as much as anything.”

Hyde spent her time after surgery diligently working toward walking and riding again. She was fitted for preliminary prosthetics in December, and by the first week of January, she was taking her first post-surgery rides.

“She’s on top of it — she’s a very motivated patient. It’s quite refreshing,” Patel said.

Hyde will get permanent prosthetics in the spring. And she has every intention of putting them to use on their favorite trails.