Instead of opening envelopes, fourth-year students at the Keck School of Medicine of USC opened emails. Instead of exchanging hugs and high-fives with their classmates on the quad, they shared messages and photos.

Exercising the kind of caution that has proven necessary over the past couple of weeks, med students around the country stayed home and awaited word regarding where they would be matched for residency programs. Weeks of waiting and anxiety ended as the soon-to-be-doctors learned where they will spend the next three to seven years of their lives.

Before the emails went out from the Keck School administration at 9 a.m., students received a video message from the school’s dean, Laura Mosqueda, MD:

Match Day, as a tradition, dates to 1952, but the process was made much more efficient and fair in 2012 with the advent of a Nobel Prize-winning algorithm that pairs hospital programs with new doctors. 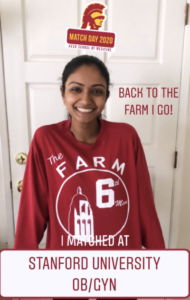 Ravali Reddy uses an Instagram filter to announce she’s headed to her first choice of Stanford, aka “The Farm.” (Photo/Courtesy of Ravali Reddy)

For the most part, the celebrations were low-key, as students Skyped or Zoomed with family and friends, while keeping in-person gatherings necessarily small.

Ravali Reddy, co-president of the graduating class, matched her first choice, Stanford Medicine, near her hometown of San Francisco. She’s going to be an OB/GYN. Her fiance was in the room with her, and she shared the good news with her parents and cousins and their families online back in the Bay Area.

Ketetha Olengue held a 7:30 a.m. video call with friends from elementary, high school, college, USC and all points in between. With her boyfriend present, she learned along with everyone else that she’d be going to Stanford as well, to be a psychiatrist. 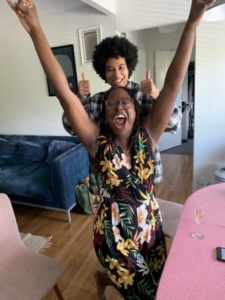 “I just yelled it out, and everyone was so happy. My mom and dad were on the call. It was just a really beautiful day,” she said.

Andrew Spitzberg, who’s from Queens, New York, also is going close to home for his residency: Zucker Hillside Hospital/Northwell Health in Glen Oaks, a neighborhood of Queens. He’ll be a psychiatrist too.

Spitzberg’s girlfriend was with him before the emails were delivered. They and his roommates enjoyed takeout and a cake with a fondant stethoscope. He acknowledged that the coronavirus pandemic had made the day somewhat anticlimactic. “This was a lot more of a somber occasion than we had hoped,” he said, before noting that everyone everywhere has had to make sacrifices. In New York City, there’s a tremendous need for doctors of all kinds.

“I’m well aware of the importance of what we’re doing right now.”