What is the permanence of life on earth? The question was put to the audience in a wide-ranging discussion about astrophysics and interstellar travel by S. Pete Worden, PhD, chairman of the Breakthrough Prize Foundation, at the Eighth Annual Vladimir Zelman, PhD, MD, Distinguished and Endowed Lectureship, held in Aresty Auditorium on the Health Sciences Campus.

“It turns out the more you get involved in astrophysics, you realize we’re lucky there’s even a planet here (because) there’s a lot of bad things that can happen,” Worden said.

Worden was director of NASA’s Ames Research Center (ARC) at Moffett Field, California, and served in the U.S. Air Force for 29 years. He has spent the past few years in the private sector, leading the prize foundation to acknowledge scientific advancements as well as pushing initiatives that address the likelihood of intelligent life in the universe and humankind’s ability to communicate and travel to outside solar systems.

“In addition to prizes, Yuri Milner (one of the founders of the Breakthrough Initiatives) started talking to me about some of the fundamental questions about life in the universe,” Worden said. “Is there any life anywhere? Is there intelligent life anywhere? Can we travel between the stars?”

Worden also discussed some of the other missions led by Milner and theoretical physicist Stephen Hawking, PhD, including Breakthrough Starshot, which aims to travel to neighboring star system Alpha Centauri, and Breakthrough Message, which would attempt to send a message to extraterrestrial life. 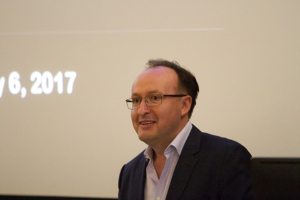 After Worden’s discussion, the audience was treated to a tour of the International Space Station, courtesy of Slava Turyshev, PhD, an astrophysicist at NASA Jet Propulsion Laboratory. Turyshev introduced the members of Expedition 54, the six astronauts and cosmonauts currently at the space station, and played video messages from each of the expedition members discussing their work in space. Flight engineer Joseph Acaba, MS, sent a personal message to Zelman, thanking him for his work to promote international collaboration between scientists.

“Working and living on the International Space Station, that was built through the efforts of 15 countries, is monitored and maintained by control centers around the world, and currently crewed by representatives from three countries, we appreciate the necessity to collaborate and work toward a common goal,” Acaba said in the video. “It is through our diversity that we work through ideas and expand our knowledge base.”

Holly Muir, MD, chair and professor of the Department of Anesthesiology at the Keck School of Medicine of USC, thanked the guest speakers and presented them with plaques marking their visit.

“I think the message that came through tonight loud and clear was, if you dream it you can do it,” Muir said.