For Heng Nhoung, a project specialist in the Department of Neurology, participating in a Keck School of Medicine of USC project to establish a neurology education curriculum in Cambodia is about more than work. It’s about family. And empowerment.

Nhoung’s parents fled their home in Cambodia to escape the communist Khmer Rouge, which executed 2-3 million Cambodians between 1975-1979 in a genocide that targeted the educated class.

“My parents are refugees. They went through the genocide and survived it,” Nhoung said. His two older sisters were born in refugee camps in Thailand. Eventually, the family settled in the United States, arriving in 1988, before Nhoung was born.

The genocide — and the exodus of those who could escape it — left Cambodia, a country of 15 million people, with just a handful of doctors. Decades later, the level of medical care remains woefully inadequate. 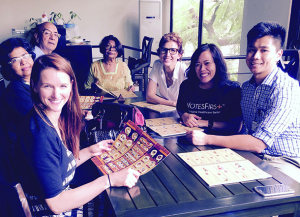 Today, Nhoung is among a group of USC medical professionals who are trying to make things better. The effort, led by Soma Sahai-Srivastava, MD, associate professor of neurology and medical director of neurology clinics at Keck Medicine of USC, is a neurology outreach program for Cambodian health care professionals funded by a grant from the World Federation of Neurology.

“The ultimate goal is to begin the country’s first neurology residency program,” Sahai said. But there’s a lot to be done first.

The effort convened in Cambodia on July 25, 2015, when a small team from USC arrived in Phnom Penh, Cambodia’s capital city, to begin a three-week whirlwind visit that covered four communities and half-a-dozen medical facilities.

They provided hands-on training and set about developing an appropriate undergraduate and residency neurology curriculum in collaboration with the country’s only government academic medical center, University of Health Sciences (UHS), which sets the curriculum in Cambodia for all academic institutions.

It wasn’t the first visit to Cambodia for Sahai, whose archeologist father had relocated from India to work there about 20 years ago. When she visited him, her heart went out to the people she met and the suffering they endured because of the country’s poor quality of medical care. She looked for opportunities to volunteer her services or assist in neurology clinics. But no such programs existed.

Then Sahai went in another direction. Instead of trying to treat patients herself, Sahai decided to focus her efforts on educating Cambodians to help themselves. She contacted the World Federation of Neurology and obtained a two-year grant to establish a toehold in neurology education in Cambodia.

“It has become my passion to help them, to create and educate the next generation of doctors there,” Sahai said.

The next step was finding people at USC who could help. She started with Shri Mishra, MD, professor of neurology. “Then other doctors heard about it and signed up,” she said. The physicians joining Sahai and Mishra were Giselle Petzinger, MD, assistant professor of neurology, and Holly MacCallum, MD, chief resident in neurology, while Heng Nhoung served the vital role of interpreter and logistical coordinator.

“Whatever neurology terms the professors would be presenting in the classroom in English, my job was to try to clarify it for the Cambodian students in their language,” Nhoung explained. He also handled scheduling for the group and arranged transportation.

Only two relatives, both on his mother’s side, remained in Cambodia after the Khmer Rouge genocide, but the USC trip gave Nhoung an opportunity to reconnect with family there. During his time in Phnom Penh, for example, he stayed with relatives instead of at a hotel.

Even before the neurology team’s visit, Nhoung was cognizant of the low standard of medicine in Cambodia. He knew that his relatives there traveled to a neighboring Southeast Asian nation because of their distrust of Cambodia’s medical system, for example. Even so, the level of suffering he witnessed was unsettling.

During their trip, the USC group visited a rural area where they saw children with epilepsy and other neurological disorders that were basically untreated.

“It was very hard to see these kids that are suffering,” Nhoung recalled. “They are having seizures or they are developmentally not there. It’s not only that they have these disabilities, but they are living in such a poor country. Living on under two dollars a day. What kind of life will they have? And how much burden will this bring on their family, just because they can’t get the treatment they need?”

The USC group is steadfast in their determination to make the situation better. For instance, Nhoung is working with Sahai to build an online database of training materials that can be used by the Cambodians to improve their level of neurologic training. The USC team is utilizing a “train the trainers” approach, engaging in regular discussions by email and Skype with those in Cambodia who are trying to improve the quality of medical education there. 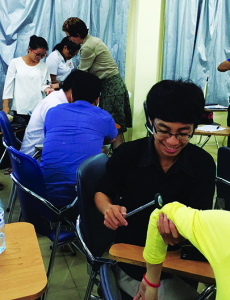 Cambodian medical students practice with some of the equipment delivered by members of the Keck School of Medicine of USC neurology team in July 2015. (Photo/Heng Nhoung)

But the challenge is immense.

In Cambodia, the medical students begin right after high school. Although they seemed open and receptive to the USC neurology training program, “we were not sure how much they know,” Nhoung said.

Another hurdle is how the public perceives medicine. “Doctors there are paid only a few hundred dollars per year,” Nhoung said. “They have to have a business on the side, pharmacy for example, to sustain a viable income.”

A lack of experienced medical leadership is another problem. Nhoung noted that most of the Cambodian health officials they met were around age 24 or 25, like himself.

By necessity, last summer’s visit involved a “lot of time teaching basic skills,” Sahai said, and not just in neurology but in related disciplines such as physical therapy.

The need is great, but so is the sense of accomplishment.

“I get to help spread neurology education knowledge and help empower the medical students there,” Nhoung said of his experience. “I think of a future patient, a child that is epileptic — they can get better care. Or a stroke patient, or any neurology patient. It’s important to empower the people there with the medical knowledge that they need to properly treat these medical issues.”

This June, Sahai and her group from the Keck School will return to Cambodia to continue their neurology basic training program and provide more neurology toolkits. Among their other goals is the establishment of the country’s first Neurology Skill Lab and development of a curriculum for neurology residency training, with a goal of launching it in the fall of 2016. It’s not too late to get involved, Sahai noted, and anyone who is interested can contact her directly at sahai@usc.edu.

As of now, Nhoung expects to be part of the USC team again next summer. But there’s a possible complication in terms of timing. After the experience in Cambodia, he has decided to become a doctor himself.

“On a personal level, a lot of my motivation to go into medicine is because there is so much need,” Nhoung explained. “And there is a lot that can be done. I don’t feel like it has to be this way. I am motivated to try to address these things as a doctor in the future.”