For Mikel Snow, PhD, it’s an honor just to be nominated. The chair of the Keck School of Medicine of USC’s Department of Cell & Neurobiology has received the 2013 Alpha Omega Alpha (AOA) Robert J. Glaser Distinguished Teacher Award from the Association of American Medical Colleges (AAMC).

“I feel incredibly honored, even humbled by the magnitude of this award,” said Snow. “To be honest, I was deeply touched by the gesture of last year’s USC AOA [chapter] students who told me they would be nominating me. I do not think of myself in terms of anyone special, but rather someone who was fortunate to stumble into a teaching career that I happened to enjoy very much.” 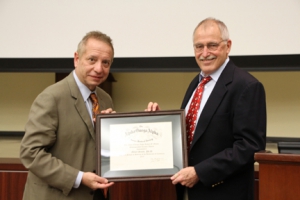 The Alpha Omega Alpha Robert J. Glaser Distinguished Teacher Awards were established by the AOA medical honor society in 1988 to provide national recognition to faculty members who have distinguished themselves in medical student education. Each medical school in the United States and Canada may nominate only one faculty member.
In addition to being a professor of cell & neurobiology and chair and director of medical education at USC, Snow also is the director of anatomy.

“I am fortunate to be teaching a subject that involves small groups, in that six students act as a team to dissect one donor (cadaver),” said Snow. “Working in the lab allows me to address the needs of individual students, determining what they know and don’t know and filling in the gaps. This is extremely rewarding because I get to see a lot of ‘ah-ha’ moments.”

“But the most rewarding aspects of my teaching happen to be the incredible people I get to teach,” he continued. “Medical students are not only very bright, highly motivated and eager to learn, they also happen to be altruistic, respectful and very appreciative of our teaching efforts. In short, they are a pure joy.”

“As an educator, administrator, and mentor, Dr. Mikel Snow is nothing short of exemplary,” wrote Carmen A. Puliafito, MD, MBA, dean of the Keck School, in his nomination letter. “Dr. Snow is a pillar of the medical school and integral to students’ success.” 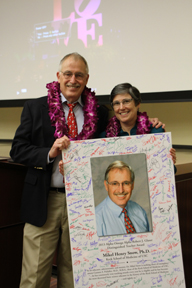 Snow had hoped to receive the award at the AAMC award ceremony in Philadelphia on Nov. 9; however, a shooting and police activity at Los Angeles International Airport prevented Snow from traveling to the event.

“Regarding missing the banquet due to that day’s crisis at LAX terminal 3, it was one of the biggest disappointments in my life,” Snow said. “However, having seen the shooter walk by our gate area with his rifle, I am grateful that my wife and I are alive.”

To make up for missing the ceremony, Snow was honored on the Health Sciences campus on Dec. 12 at the Mayer Auditorium. Keck School students spoke briefly about Snow’s impact on their education, Puliafito presented Snow with his award and guests celebrated at a special reception held in the Harry and Celesta Pappas Quad.