At 8:55 a.m., 167 excited and hopeful fourth-year medical students gathered March 20 in Harry and Celesta Pappas Quad for the annual Match Day, joining 17,000 graduating U.S. medical students who opened envelopes together and learned where they would spend the next few years of their lives.

Medical students rank their preferences for residency programs, and residency programs rank students. The lists are combined and matches are made using a computer algorithm by the non-profit National Resident Matching Program.

Moments before the fateful hour of 9 a.m., the crowd shouted “5…4…3…2…1…woo hoo!,” then students scurried off to peel open their envelopes with excitement. Shrieks and screams echoed across the quad as tears flowed and students dispersed to share their news with family and friends.

“I’m going to the beach,” exclaimed T.C. Scotton, who matched with the UCLA Semel Institute for Neuroscience. He plans to become an advo­cate for psychiatric patients. 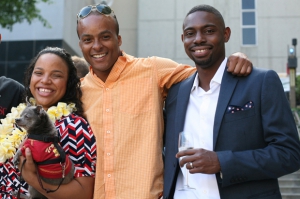 Medical students Miriam Lassiter, T.C. Scotton and Branden Turner are all smiles after learning their fates on Match Day 2015.

“I’m going back home,” shouted Susana Torres, originally from the Bay Area, about her first-choice match with UC Davis Medical Center.
“These are tears of joy,” sighed Shuhan He, who was relieved that this day had finally arrived and that he matched with his first choice, Harvard Neurology Residency Program.

The morning’s speakers included 2015 class co-president Reem Itani, as well as Donna Elliott, MD, EdD, senior associate dean for student affairs, and Henri Ford, MD, MHA, vice dean of medical education. Also, the dean of the Keck School of Medicine, Carmen A. Puliafito, MD, MBA, gave a champagne toast for the students via Skype from a conference he was attending in Miami: “I’d like to propose a toast to the finest class in the history of the Keck School of Medicine, the class of 2015.”

Elliott stated that every student in the class matched to a residency program for the first time in the history of the Keck School. She said 113 students will complete all or part of their training in California, with 38 at LAC+USC Medical Center. Sixty-four students will leave California for at least some of their training; in all, 22 other states and the District of Columbia were represented in the results, with New York again having the highest number of Keck School students, followed closely this year by Texas.

Regarding specialties, internal medicine had the largest number of resident matches with 29 students, followed by family medicine at 14, OB/GYN at 13, pediatrics at 12, and emergency medicine at 11. Radiology, general surgery and orthopaedic surgery all matched with 10 students; anesthesiology and Med-Peds each matched with nine.

Several Keck School students not only have goals to be excellent physicians, they want to change the face of health care.

“I don’t just want to be a doctor. I want to change the game,” said Miriam Lassiter, who matched with her first choice, a combined family medicine-emergency medicine program with the Christiana Care Health System, located in Wilmington, DE. “I want to move social medicine forward and be a pioneer in this new health-care system.”

Los Angeles local Harut Hovsepyan spent a year at the White House as an intern assisting with the implementation of the Affordable Care Act. “My first goal is to be a good doctor and know emergency medicine really well, but I also want to work in health policy and health and human services,” said Hovesepyan, who was matched with Loma Linda University Medical Center for emergency medicine. “Emergency physicians are problem solvers and when I treat a patient, I will deal with their social issues along with their medical care. I want to make a real difference in underserved communities.” 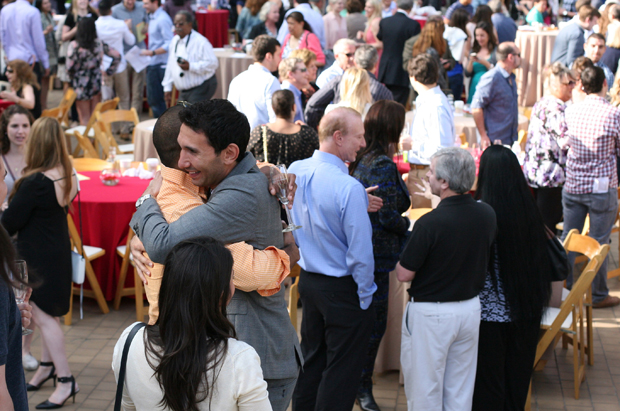