Keck Medicine of USC vascular surgeons are the only surgeons in Southern California using a new robotic system with the potential to reduce procedure times, decrease radiation, shorten hospital stays, enhance safety and put patients back on their feet again faster. 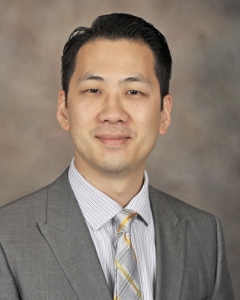 Toft, a high school mathematics teacher who had been in good health all of his life, began suffering last summer from blockage of the left superficial femoral artery. The blockage cut off oxygen to his lower left leg, causing severe leg cramps and endangering the leg.

“As a teacher, I’m constantly moving, but I couldn’t walk a city block without needing rest,” he said. “My general practitioner told me I needed to get help or I was likely to lose my lower leg.”

“The operation took an hour and a half, and I was out of the hospital by noon the next day,” Toft said.

PVD, also known as peripheral arterial disease (PAD), includes diseases of blood vessels outside of the brain and heart and refers to narrowing or blockage of such vessels with plaque.

According to the National Institutes of Health, PAD affects 8-12 million people in the United States, especially people over age 50.

“Thanks to my GP and Dr. Sung Wan Ham, who performed my surgery, I feel no restrictions,” Toft said. “I can walk and run for miles and do everything I want to do.”

Keck Medicine of USC recently acquired two Magellan Robotic Systems and has plans to serve as a regional Center of Excellence to help train other physicians in the region on use of this emerging technology.

The robotic system was cleared by the federal Food and Drug Administration for navigation to anatomical targets in peripheral blood vessels in 2012.