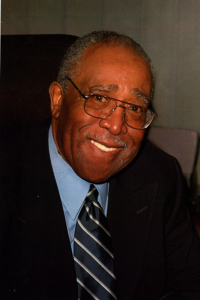 John Albert Davis, PhD, former assistant clinical professor of medical education at the Keck School of Medicine of USC, died on Jan. 13. He was 82.

Davis left a lasting mark on the Keck School and the lives of thousands of young people by establishing a nationally recognized program designed to boost the number of minorities in the biomedical sciences, called Med-COR.

Davis joined the Keck School in 1968 as a research associate with responsibility for recruiting and counseling minority students. Med-COR grew out of a realization that diversifying medical schools required an effort to reach students before college to improve their skills and introduce them to careers in health care.

Initially, 15 students from four inner city Los Angeles Unified School District high schools joined the program, spending Saturdays at the Keck School for tutoring in core skills — math, science and English — that would help them get into college. Davis kicked off the Saturday gatherings with words of encouragement for the students or a short discussion about a topic he thought might help them in the future, such as professionalism in the workplace.

Since that first group in 1970, Med-COR students have been able to talk to staff and faculty from the Keck School and learn about careers in medicine. They also spend summers working alongside doctors and nurses at Keck Medical Center of USC. At its peak, more than 1,000 students from 77 schools were enrolled in Med-COR, which sends 99 percent of its graduates to college.

“Med-COR was a big part of our family,” Keith Davis said. The elder Davis spent nearly every Saturday at Med-COR gatherings from 1969 until 2011. In the early years, his wife, Judith, was assistant director and the couple brought their three children to every Med-COR event, including all the Saturday sessions.

John Davis endured a hardscrabble beginning in LaGrange, Georgia. An orphan by the age of five, he and his brother were sent to live with an aunt, who promised never to separate the boys. After a run-in with the Ku Klux Klan, his brother was spirited away to live in Los Angeles. Davis soon followed and the pair got by living in attics or spare rooms, relying on their wits and a network of family friends and neighbors who cared for them.

Keith Davis said that those early years made a lasting impression on his father.

“He believed that if so many people hadn’t helped him, taken care of him, he wouldn’t have made it,” Keith Davis said. “He strongly believed that it takes a community coming together to help young people make their way.”

John Davis attended both Los Angeles Community College and UCLA on athletic scholarships. Shortly after finishing his doctorate in sociology in 1971, he joined the faculty at Loyola Marymount University, where he founded the Department of African American Studies, in addition to continuing his work at the Keck School. He remained in charge of Med-COR until 2010.

“Dr. Davis was an influential figure in expanding the reach of the Keck School of Medicine into the surrounding communities,” said Rohit Varma, MD, MPH, dean of the Keck School and director of the USC Gayle and Edward Roski Eye Institute. “The effects of his forward-thinking Med-COR program continue to be felt today, as dozens of underrepresented students flourish in college, medical school and beyond.”

One former Med-COR student, Jose Avalos, MD, joined the program in 1995, because his own parents, immigrants from Mexico with little education, couldn’t help him understand high school science or how to navigate the process of applying for college.

“He is responsible for my career as a doctor because he gave me the professional guidance that my parents couldn’t,” Avalos said.

Avalos now is on the faculty at the Kaiser Permanente Family Residency Medical Program and is involved in diversifying the work force at Kaiser. “He was my second dad and I am trying to follow in his footsteps,” Avalos said.

John Davis is survived by his wife, Mamie Davis, who he married after his first wife, Judith, passed away. Three children — Gregory Davis, Deanna Sweeney and Keith Davis — and eight grandchildren also survive him.

Gifts to support the important work of the Med-COR program can be made here.