The ground is moving. The rumble of construction trucks signals that work is underway on a series of projects across the Health Science Campus aimed at increasing parking and expanding medical services.

Construction began in January on the USC Norris Healthcare Center (HC3) near the corner of Alcazar and San Pablo streets. The building will house clinics dedicated to cancer treatment, including an ambulatory surgery center and a women’s cancer program. There will also be a retail pharmacy, along with patient and family waiting areas.

After a delay because of obtaining permits, construction began in November and continues on a six-level, 1,200 space parking structure on San Pablo Street, near Valley Boulevard. The structure is expected to open in late 2015, according to Elvis Evans, manager of hospital parking and transportation operations.

“Projects such as the SSP Structure will be very beneficial to employees and patients, as it will relieve the pressure [for parking] we are currently facing,” Evans said.

Off-site parking areas are suggested to employees, helping them avoid dust and debris from construction, as well as traffic delays and limited space to park, Evans added.

Construction of the O’Neal Lot on the corner of Soto and Alcazar streets has been delayed until the new parking structure is completed. The lot is expected to be finished in July 2016 and will create 300 spaces.

The finished six-story parking structure will eventually sit next to a new extended-stay 200-bed hotel on the northeast corner of the San Pablo and Alcazar intersection. The hotel development will include 19,000 square feet of retail space, including a sit-down restaurant and 14,000 square feet of conference space, said Laurie Stone, associate senior vice president for real estate and asset management.

A new student housing building is under construction and will have 177 units with about 450 beds. The building is expected to be completed by fall 2016. 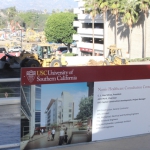 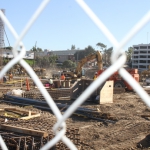 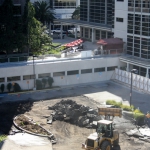