On April 5, members of the Keck School of Medicine of USC community gathered in Aresty Auditorium to hear firsthand impressions of students’ experiences while participating in study away experiences with the Master of Science in Global Medicine program. Global Medicine students traveled to UNICEF headquarters in New York City; Kolkata, India; and Bocas del Toro, Panama, to learn about the intersections of health and community needs. Though students’ on-site experiences were as varied as the three different settings themselves, one unifying theme that students shared was just how much they learned by being present and listening to those who were sharing knowledge, culture and personal stories.

The importance of understanding the health care needs of a community firsthand also was emphasized by the roundtable’s keynote speaker, Chewe Luo, MD, PhD, the UNICEF chief of HIV/AIDS, Programme Division. Luo explained that her own career trajectory was informed by what was needed at the time and in the community she wanted to serve. 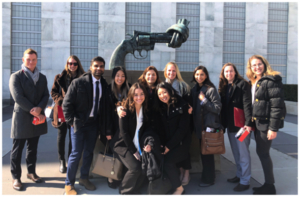 “I consider myself very fortunate to work in Zambia,” Luo said. “At the beginning of my career, it became apparent that the type of care I was trained to deliver and the types of problems I confronted in London were not going to be what was needed or what would work in Zambia. That is when I discovered that when you are faced with problems in health care, you have to ask ‘why?’ to figure out the root of the problem.”

Luo shared data and stories from UNICEF’s worldwide efforts to assess what was changing and what new steps needed to be taken when the rates of success of initial efforts to stem the tide of rapid HIV transmission in African nations began to slow down. She emphasized the importance of not being complacent, and of continuously adding new perspectives to global health efforts.

“You are well positioned with your younger brains to face these challenges as we near a turning point in HIV as a global community,” Luo advised, inspiring students assembled to work toward change, wherever they may live and work.

Luo’s speech was followed by student team presentations from each location. The UNICEF team remarked on how eye-opening their lectures were from experts who have worked around the world, and the new roles that business partnerships may play in combatting health crises and the global burden of disease. Team India shared their impressions of the stark contrast that existed between private and public health care in amid India’s emerging economy, and explained several challenges specific to the country’s growth. For their part, Team Panama shared stories of health promotion and health education for children and adults in the remote Bocas del Toro region of Panama, and how personal the experience of helping others became while serving the Ngobe community.

Program Director Elahe Nezami, PhD, closed the event with thanks to Luo for her inspiring words and her ongoing work, assuring the crowd that the Keck School’s students would continue the work that global health leaders have begun. Nezami said, “It is now up to you to carry the torch when it is passed to you, and to listen and learn with humility from those you aim to serve.”