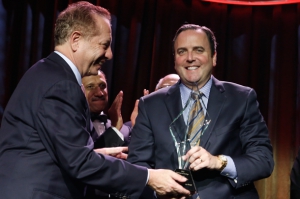 Keck School of Medicine Dean Carmen A. Puliafito presents Derrick Hall, president and CEO of the Arizona Diamondbacks baseball franchise, with the inaugural Louis Zamperini Courage Award at the gala.

The  USC Institute of  Urology, one of the nation’s top-ranked urology programs, honored Derrick Hall, president and CEO of the Arizona Diamondbacks major league baseball franchise, with the inaugural Louis Zamperini Courage Award at its annual “Changing Lives and Creating Cures” gala.

Hall, a Los Angeles native and a prostate cancer survivor and advocate, received the award at the annual event, held Nov. 20 at the Beverly Wilshire Hotel in Beverly Hills.

“Derrick Hall is a well-known leader on and off the baseball field,” said Inderbir S. Gill, MD, MCh, executive director of the USC Institute of Urology.

“He faced his greatest personal challenge when he was diagnosed with prostate cancer in 2011, just as his team was battling for a division title,” Gill said. “When he immediately went public, encouraging other men to get tested after age 40, he showcased the courage and resilience that exemplifies the spirit of Louis Zamperini and this award.” 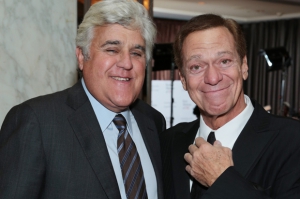 Named for World War II P.O.W. survivor, Olympic athlete, USC alumnus and prostate cancer patient of the USC Institute of Urology, the Louis Zamperini Courage Award embodies the spirit of this hero who faced life’s toughest tests and challenges and showcased the courage that survivors need. Zamperini is the subject of the best-selling book, “Unbroken” by Laura Hillenbrand and major motion picture of the same name premiering next month and directed by another example of courage in the face of cancer, Angelina Jolie.

The USC Institute of Urology annual gala event draws more than 500 leading businesspeople, philanthropists, entertainment industry executives, medical and health care professionals, celebrities, media and other VIPs from Los Angeles and around the country to raise awareness and funds for the cancer-fighting robotic and open surgery treatments, research efforts and world-class programs for men’s and women’s pelvic health issues.