“Los Angeles finds itself falling behind in the race for the future of this increasingly important industry,” Nikias said at the June 8 Business of Biotech event that brought together community, business and university leaders.

The USC leader envisions a biotechnology park in east Los Angeles on the Health Sciences Campus. The development could provide thousands of construction and biotech jobs.

“We will see an explosion of employment in many areas, and we will watch this community emerge as an attractive area for large companies and small business startups, all searching for new employees to help them grow and expand,” he said.

“Now we see an unparalleled opportunity to keep this intellectual capital right here in our region,” he said.

The event at the Eli and Edythe Broad CIRM Center for Regenerative Medicine and Stem Cell Research at USC focused on the educational, employment, health and business benefits of a biotech park.

“The university has long provided an environment that fosters collaboration and entrepreneurism, which is critical to the success of the biotech park,” Varma said. “This type of scientific innovation and growth allows us to expand the Keck School’s commitment to our community here in Los Angeles and advances our quest for life-changing innovations and discoveries.”

According to a recent report by the trade organization Biocom, biotechnology creates $317 billion in annual economic activity in California. Los Angeles captures about 13 percent of that, according to the report, which attributes more than a million high-paying California jobs to biotech. It’s estimated that each research job in biotech creates four jobs in support roles. 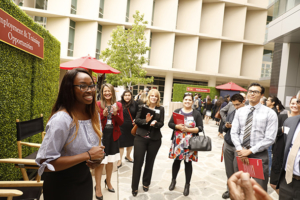 Grifols Biologicals president Willie Zuniga spoke about his ascent to lead the El Sereno-based company, which partnered with USC Civic Engagement in hosting the event and frequently partners with the university to expand biotech opportunities. Seddie McKenzie is a manufacturing technician at Grifols Biologicals who began her biotech career after earning a certificate in biotechnology at Los Angeles Valley College.

“There are multiple people I work with now who went through the same steps I did — they started at Grifols with a certificate as well,” McKenzie said, after leading an informational session on employment and training opportunities in biotechnology.

McKenzie, who just earned a bachelor’s degree, will pursue a graduate degree in biotechnology.

“I think it’s a great opportunity for people to get some work experience and decide what they want to do with their lives,” she said. “If they decide ‘I do love this, I do want to create a career with this industry,’ it can be a stepping stone.”