From new clinical and research buildings and student housing units to parking areas, tree-lined sidewalks and a new hotel, a series of projects are underway at the 79-acre campus to transform the area into an oasis of medical research and health care.

“This work is being done to ensure Keck Medical Center of USC remains a leader of cutting-edge research and world-class health care for generations to come,” Tom Jackiewicz, senior vice president and CEO of Keck Medicine of USC, said during a ceremony in September to mark the latest construction milestone: The final steel beam was placed atop the Norris Healthcare Center, a building next to Keck Hospital of USC representing the ongoing connection of the Norris Family to USC.

“It’s an exciting and historic time to be at Keck Medicine,” Jackiewicz added. 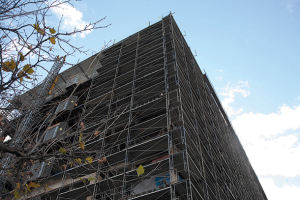 Norris Healthcare Center, near the corner of Alcazar and San Pablo streets, is seen under construction on Jan. 7, 2016.

Now little more than a skeleton of concrete and steel, the Norris Healthcare Center will stand near the corner of Alcazar and San Pablo streets and be a place for innovative treatment and compassionate care. The center will have an ambulatory surgery center, a women’s cancer program, the region’s first comprehensive multiple sclerosis clinic, a state-of-the-art infusion center and several new dining options. The center is the first new medical building on the USC Health Sciences Campus in more than a decade and will expand outpatient care space by 36 percent, adding more than 100,000 square feet of space. The Norris Healthcare Center is scheduled for completion in June 2017.

Construction, meanwhile, is nearly finished on a new six-level, 1,200-space parking structure on San Pablo Street, near Valley Boulevard. The structure is set to open at the end of January and will house staff vehicles, opening up parking for patients and families in the Keck structure, adjacent to Keck Hospital.

A new extended-stay 200-room Hyatt House hotel also is under construction at the northeast corner of the San Pablo and Alcazar intersection. The hotel development will include 14,000 square feet of retail space, including a sit-down restaurant and 10,000 square feet of conference space. A 2017 opening is targeted.

Currie Hall, a new student housing complex, will stand just south of the hotel, providing another option for medical students wishing to live within walking distance of the Keck School of Medicine. The complex will have 178 units with about 450 beds and is scheduled for occupancy in September 2016. The ground floor will also include a new child care center for the campus, with capacity for 130 children.

To help ease car traffic within the Health Sciences Campus, a new signalized intersection at Soto and Norfolk streets recently opened. The intersection provides an additional entrance to the campus and its completion marks another milestone in the HSC Beautification Project — a multiyear construction initiative that includes 12 phases across the Health Sciences Campus.

The ongoing construction across HSC will cause several changes in bus and tram routes and schedules during the Spring 2016 semester: