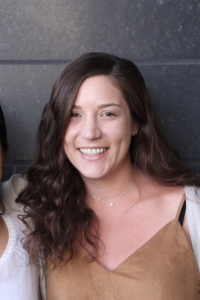 “Anti-psychotic medications can numb you to the point where you no longer have your own thoughts,” said Nicole Koutsodendris, graduate of the master’s program in stem cell biology and regenerative medicine program at the Keck School of Medicine of USC.

Her strong opinions about the current state of medicine are not unfounded. When she was in college, Koutsodendris’ father was diagnosed with schizophrenia and prescribed drugs that were ineffective in improving his quality of life.

In addition to this experience, she came face-to-face with the current limitations of modern medicine as an undergraduate student at the University of Miami in Florida. As a volunteer in the neurological department of Nicklaus Children’s Hospital in Miami, Koutsodendris encountered a 6-year-old patient with drug-resistant epilepsy who had multiple seizures every day.

“I didn’t like how helpless the medical field could be sometimes, and didn’t want to just administer drugs that weren’t going to fully recover the patient,” she said.

Witnessing such limitations drove her to pursue a career in research at the intersection of neurobiology and stem cell science, in an attempt to find new therapies for neurological diseases that have thus far been incurable. She joined a cancer research lab after her second year in college.

After transferring to USC for the second half of her undergraduate education, Koutsodendris joined the lab of Justin Ichida, PhD, assistant professor of stem cell biology and regenerative medicine, where she studies neurodegenerative diseases such as amyotrophic lateral sclerosis (ALS). In ALS patients, nerve cells in the brain and spinal cord degenerate, resulting in the progressive loss of motor control and voluntary movement. As a member of the Ichida lab, Koutsodendris now is using stem cell technology to investigate the genetic mechanisms underlying ALS onset and progression.

“Working on ALS is really important to me because the only FDA-approved drug for this disease extends life by just one month,” she said.