The Molecular Imaging Center (MIC) on the Health Sciences Campus has been helping to advance faculty research by providing in vivo imaging technology for nearly three decades. What started as a small animal imaging core has evolved into a multimillion-dollar, state-of-the-art imaging center with multimodal capabilities.

“The opening of the new cyclotron last year has taken what we can do to a different realm because we can produce tracers that aren’t commercially available,” explained Edward Grant, MD, chair and professor of radiology at the Keck School of Medicine of USC. 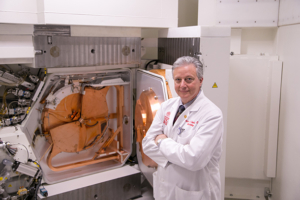 Peter Conti, seen here with the Cyclotron, is the director of the Molecular Imaging Center. (Photo/Ricardo Carrasco III)

The cyclotron, which allows for the production of radionuclides such as 18F, 11C, 13N and 64Cu, produces isotopes used in positron emission tomography (PET) imaging, which can help researchers doing translational research that may ultimately be used in clinical trials on humans.

One example of a compound that was developed through a collaboration between a faculty member of the Keck School of Medicine of USC at the MIC is called 18-FMAU. That compound now is being tested for use in humans with prostate cancer at Keck Medicine of USC.

The MIC also houses a Preclinical Imaging Core that provides several imaging technologies — PET, CT, MR, optical and ultrasound scanning — that can help researchers answer a wide variety of biomedical questions and design research that can move from preclinical to clinical settings.

“In vivo preclinical imaging has revolutionized biomedical research and drug delivery and development, and has become an invaluable tool for both academia and industry researchers,” said Peter Conti, MD, PhD, professor of radiology at the Keck School and director of the MIC.

Over the years, the team at MIC has collaborated with colleagues across USC studying tumor metabolism, angiogenesis, Alzheimer’s disease and research on teeth and bones.

The MIC has applied for a license to produce clinical compounds that are not commonly available because they have short half-lives. One example is 13N ammonia, which is used to perform cardiac scans to produce images that are superior to existing technology and are not widely available.

“This facility is a transformative resource for USC because we have one of the leading translational imaging facilities in the world,” said Grant Dagliyan, MPH, associate director of the MIC. “This provides a unique resource to advance research on a number of fronts that cannot be done elsewhere.”