After months of hard work, dozens of students from Francisco Bravo Medical Magnet High School presented their original research projects at the annual Bravo-USC Science and Engineering Fair on March 4 to a panel of judges from USC, UCLA and other institutions. The budding scientists vied for awards and the opportunity to exhibit their findings at the upcoming Los Angeles County Science and Engineering Fair.

Some participants are cohorts of the USC Science, Technology and Research program and the Engineering for Health Academy (STAR/EHA), led by USC School of Pharmacy Professor Daryl Davies, PhD, and Joseph Cocozza, PhD, assistant professor of research ophthalmology at the Keck School of Medicine of USC. Since 1990, STAR/EHA has opened pathways for high school students to pursue science, technology, engineering and math (STEM) careers by providing them with USC faculty mentors and hands-on research experiences in laboratories.

“The young scientists and engineers in STAR/EHA are full of ideas and excitement about STEM fields,” Davies said. “Participating in the Bravo-USC Science and Engineering Fair is a chance to showcase the inspiring work they do throughout the year.”

“Once the students defend their research, they’re breaking a mental barrier,” said Glendy Ramirez-De La Cruz, Bravo High STAR/EHA program coordinator. “Some of these students don’t think they’re smart enough or don’t think they can interact with faculty and professionals until they prove they can at the fair.”

The range of research categories included physics, pharmacology, engineering, animal physiology, and behavioral and social sciences. In each category, students were evaluated on creativity, scientific thought, thoroughness, skill and presentation clarity. Research topics were timely and impactful, from the effect of social media on mental and physical health to a baby-crying detector for the deaf and hard-of-hearing community. 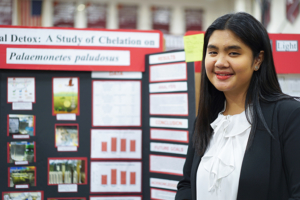 For Larry Rodriguez, a PhD candidate at the USC School of Pharmacy, serving as a judge was an opportunity to mentor the next generation of scientists. “I knew these were high achievers, but some of these projects are so elegant they can be made into real prototypes,” he noted.

Judges Tyler Ard, PhD, assistant professor of research neurology at the Keck School of Medicine of USC, and Ian Haworth, PhD, associate professor of pharmacology and pharmaceutical sciences at the USC School of Pharmacy, both recalled developing an interest in science at a young age and the key figures who helped foster that passion. “Everybody starts somewhere, so you have to pay it forward,” Ard said.

“The support and validation of teachers and professionals can make all the difference in a student’s decision to pursue a career in science,” Haworth said. “I hope my conversations with the students will play a small role in this process.”