Sitting in the shade behind USC’s Bovard Administration Building, he counted six books by writer Joyce Carol Oates in the tote bag beside him.

“I always bring as many as I have,” said Sherburn, who lives in Vista in San Diego County.

A fan of her short stories, he skipped her Saturday panel so he could stake out a spot at her signing booth, where she would appear in about an hour.

Sherburn, a former USC student, has been coming to the festival for nearly 15 years. He’s been to several of Oates’ signings. 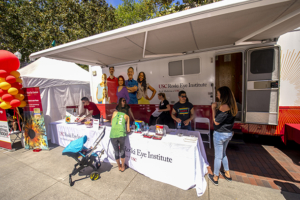 “She’s been the queen of the Gothic short story,” Sherburn said.

Just across campus, near the children’s stage, 8-year-old Aiden Lim was getting the book Giant Squid signed by co-author Candace Fleming. The book prompted him to research the cephalopod.

“When food goes through the esophagus, it goes past the brain,” he said, sharing a fact he learned. “It’s gross.”

Now in its 23rd year, the Los Angeles Times Festival of Books brings more than 150,000 folks from across Southern California and the nation for the largest event of its kind in America. The event, in its eighth year at USC, ran April 21-22.

Festival of Books: A wealth of signings and speakers

While lining up to get books signed is often on the checklist of many festivalgoers, so is checking out the many panels, which span conversations about radio, the Me Too movement and longevity. Speakers ranged crime writer Walter Mosley and musician Moby to actress Gabrielle Union.

Jorge Ramos, Univision anchor and Stranger: The Challenge of a Latino Immigrant in the Trump Era author, was greeted at Ronald Tutor Campus Center with roaring applause. He explained that Los Angeles was the first spot where he landed outside Mexico and will always feel like home. 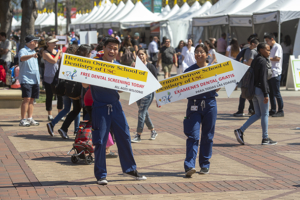 Already a working journalist, he left Mexico in the early 1980s due to censorship, landing in Westwood, where he took classes at UCLA and paid $5 a day to board at a house full of other immigrant students.

“We couldn’t use the kitchen. It was only for [the owner],” he said. “We started cooking in the closets. … Can you imagine the smell?”

Ramos talked about the current political climate, mentioning the 2015 news conference where he pressed then-candidate Donald Trump and Trump responded: “You haven’t been called. Go back to Univision.”

Asked about remaining objective as a journalist, he responded: “Sometimes, at certain occasions, you have to take a stand,” comparing the current climate to Watergate or the investigation of the Catholic Church.

When he spoke — whether it was about being Chicano, from Mexico City or L.A., or an immigrant in 2018 — he often got hollers and applause from the audience. Angelenos in the audience, which included DACA recipients and the parents of DACA recipients, have been watching him anchor the news on Univision since the late ’80s.

Gabriela Cervantes, a 25-year-old USC alumna, grew up watching Ramos with her family in Los Angeles, often talking about his newscasts at the dinner table. She said Ramos inspired her, after he shared his own experience of feeling like an extranjero, or stranger, when she left for college. 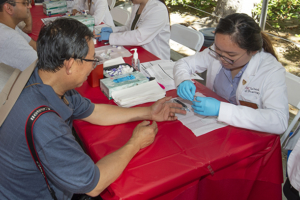 “I realized that people that looked like me were the ones in the aprons in the kitchen, who were cleaning my dorm room and trimming the trees on campus,” she said. “It made me realize my place at the university wasn’t just my own efforts, but that of many people like himself, who opened doors for many Latinos and Dreamers.” 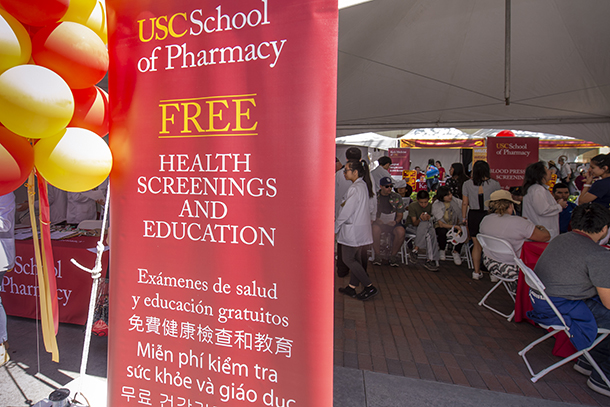 Free health screenings and education are offered during the L.A. Times Festival of Books. (Photo/Gus Ruelas)