As part of homecoming weekend, Keck Medicine of USC and the Keck School of Medicine of USC hosted alumni at the Annual Meeting and Healthcare Conference. The Nov. 9 event included a CME course, luncheon and tour of the Health Sciences Campus. Attendees were treated to a pair of enthusiastic speeches from Keck School Dean Laura Mosqueda, MD, and Keck Medicine COO and Keck Medical Center of USC CEO Rod Hanners. Both speakers shared current campus and program news, as well as future plans.

“Who hasn’t been back here in a decade or two?” Hanners asked the gathered crowd. “We’ve got a lot to celebrate.”

Chief among the exciting developments, according to Hanners, was Mosqueda’s recent official appointment as the school’s new dean. It was noted that Mosqueda had “brought normalcy, stability, and a sense of humor and grace” to the role. 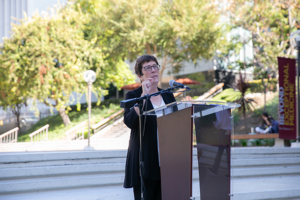 Laura Mosqueda tells attendees that the conference is a celebration of “the future of medicine and the future, really, of our students.” (Photo/Ricardo Carrasco III)

Mosqueda herself isolated the purpose of the conference as a celebration of “the future of medicine and the future, really, of our students,” adding that improvements to just one medical student’s education could lead to positive effects on thousands of lives.

“We’re pursuing strategic initiatives to transform the school into one of the most highly regarded and competitive medical schools in the nation,” Mosqueda said, pointing to expanded master’s degree programs and new campus facilities.

“The renewal effort is framed by an ethic of social justice. Understanding the nexus of medicine, medical care and health with social justice is very important. We want our students to be physicians, citizens and scientists. Not just one, but all three.”

On a related note, Mosqueda added that the medical school was at the forefront of the nation in terms of developing a robust wellness program for students, including meditation training and “the Keck Check, a mandatory visit with a psychologist for first-year students,” which she hoped would help bypass the usual stigma of mental health checkups.

During his speech, Hanners detailed recent openings such as the Norris Healthcare Center, which was the first new patient care building on the campus in over a decade. Hanners also touted forthcoming expansions like the biotechnology park and the Sky Garden, set to open in 2019 and serve as a haven for “patients as well as our staff when they need a place of respite.”