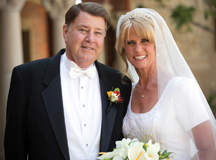 John and Karen Reid requested that in lieu of traditional gifts for their wedding, guests consider donations to the Darlene Dufau Reid Endowed Scholarship Fund.

When his wife, Darlene Dufau Reid, passed away after a long illness in 2008, John Reid (USC BS ’69), a Superior Court judge for 27 years who presently sits in the Santa Monica courthouse, was not sure love would ever find him again.

Then one day, John bumped into his future wife, Karen, by chance. “Darlene had been gone a couple of years and I was tired of eating my own cooking,” recalled John. “I wandered down to the pier in Malibu, and Karen was standing on the pier talking on the phone to her son. I looked at her, and she looked at me, and I couldn’t help myself — I asked her out to dinner. We stayed talking that evening until the restaurant closed.”

John and Karen were married on April 6, 2013. In lieu of gifts, the couple requested donations in support of the Darlene Dufau Reid Endowed Scholarship Fund at the Keck School of Medicine of USC. The scholarship is presented annually to an outstanding medical student. To date, donations in honor of the ceremony have reached nearly $13,000.

John is also a current director of the Keck School of Medicine Parents Association.

Darlene graduated from USC with a bachelor’s degree in sociology in 1967 and a master’s degree in education in 1969. She became a full-time university volunteer after practicing law and working as a TWA flight attendant for 25 years.

In 2004, Darlene received the alumni association’s Alumni Service Award. In 2006, while president of the USC University Hospital Guild, Darlene created the 5K Walk for Keck, a fundraising event that still takes place annually. Darlene also worked extensively with USC’s alumnae groups, most notably on behalf of the SCions program for USC legacy students.

Although Karen did not attend USC, she has quickly become part of the Trojan Family. Both Karen and John felt that the suggestion of donations in lieu of wedding gifts was natural.

“We both have our own households and didn’t need the traditional wedding gifts — we have too many irons and toasters as it is,” John explained. “Our first thought was to ask for no wedding gifts, but we’d like to try to add to Darlene’s scholarship to enable it to help more students.

“Karen is a wonderful woman,” added John. “She’s kind and giving, and we wanted to do our best to give back to USC students and their parents — and most importantly, help wonderful, highly educated people achieve their goals. As part of the Trojan Family, helping others reach their goals is just an ongoing thing you do.”