The inaugural USC Stem Cell Symposium convened with a straightforward truth about the future of regenerative medicine: “It will take a dedicated community of scholars across the disciplines to have maximum impact,” said Interim Provost Michael Quick, PhD.

The Jan. 16 symposium brought together precisely such a community, with speakers from USC’s schools of medicine, dentistry, gerontology and engineering, as well as the Saban Research Institute of Children’s Hospital Los Angeles (CHLA). Held at Aresty Auditorium at the Keck School of Medicine of USC, the event was hosted by USC Stem Cell, a collaborative and multidisciplinary effort bringing together more than 100 researchers and clinicians who work to translate discoveries into cures. 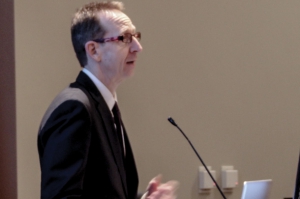 “An important part of the future is how USC Stem Cell is going to engage other schools — in business, in public policy, in law — as this area of medicine becomes increasingly more involved,” said Andy McMahon, PhD, FRS, chair of the USC Stem Cell executive committee.

He shared his vision of engaging even more scholars from beyond the scientific realm. “So I’m looking forward to a future that embraces many more schools than are currently represented.”

McMahon said, “Particularly, we’re interested in interdisciplinary projects that bring people together across different areas of research that tend to have boundaries. The idea is to stimulate new interdisciplinary research and to enhance the student’s or postdoc’s ability to be a creative and independent scientist.”

One of the day’s highlights was the keynote address by Fred H. Gage, PhD, who is the Vi and John Adler chair for research on age-related neurodegenerative disease at the Salk Institute for Biological Sciences and UC San Diego.

Gage discussed the concept of “mobile elements,” genetic material that can move from one part of the genome to another. When these mobile elements insert into neural genes, they may potentially alter behavior, enhance genomic diversity and even speed evolution.

“It’s fantastic to see the diversity of different research that’s going on in the schools across USC,” said McMahon. “I very much look forward to meeting again next year.”