Recognizing the most influential people around the globe in ophthalmology, The Ophthalmologist named Amir H. Kashani, MD, PhD, of the USC Gayle and Edward Roski Eye Institute to its annual Power List 2017 announced April 12.

The Power List, which publishes in April, is an international celebration of ophthalmology’s thought leaders and inspirational talents, and this year focuses on the “rising stars” in the field. More than 36,000 readers across Europe and North America vote for their peers for inclusion in this annual list. Receiving this accolade is acknowledgment by his contemporaries that Kashani’s contributions to the advancements in ophthalmology are only expected to grow in influence over the next decade. 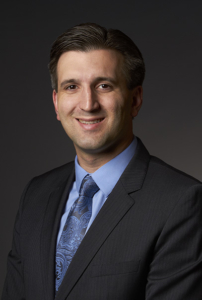 “I’m extremely honored to be included in this accomplished list of ophthalmologists and to be seen by The Ophthalmologist readers as one of the innovators in the field,” Kashani said.

Kashani is co-author of a book titled, Optical Coherence Tomography and OCT Angiography: Clinical Reference and Case Studies, intended for use by clinicians, technicians and imagers. He has co-authored more than 30 peer-reviewed publications, two book chapters, several reviews and is an NIH-funded investigator. In 2016, Kashani was nominated as one of the top 150 innovators in medical and surgical retina by Ocular Surgery News. Kashani is an assistant professor of clinical ophthalmology at the Keck School of Medicine of USC.

Kashani is the third USC Roski Eye Institute ophthalmologist to be named to The Ophthalmologist’s Power List since its inception in 2014 joining Mark Humayun, MD, PhD, and Carmen Puliafito, MD, MBA, both Power List honorees in 2016.