The best of the best gathered at Town and Gown on the University Park Campus recently to celebrate notable achievements among both faculty and students. The Academic Honors Convocation was held April 17 and recognized several faculty members from the Keck School of Medicine of USC.

USC President C. L. Max Nikias, PhD, presented the Presidential Medallion, the university’s highest honor, to Mark S. Humayun, MD, PhD, “for his distinction in the fields of ophthalmology and biomedical engineering, his transformative approach to the treatment of blindness, and his profound influence on patient care.” Humayun is co-director of the USC Gayle and Edward Roski Eye Institute and director of the USC Institute for Biomedical Therapeutics, University Professor of Ophthalmology and Cornelius J. Pings Chair in Biomedical Sciences. 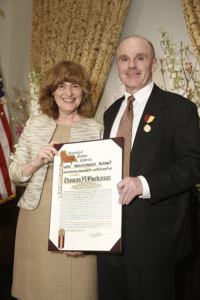 “Professor Humayun’s pioneering medical breakthroughs have given hope to countless people suffering from previously incurable conditions,” Nikias said. “In awarding him the Presidential Medallion, we recognize his exceptional talent for innovation, the visionary leadership he brings to the practice of ophthalmology, and his longstanding dedication to the USC community.”

In 2016, President Barack Obama presented Humayun with the National Medal of Technology and Innovation in honor of his lifelong dedication to bridging medical science and engineering to restore sight.

“Mark’s advances in science and technology have set ever-higher standards in the field of ophthalmology and biomedical engineering,” said Rohit Varma, MD, MPH, dean of the Keck School and director of the USC Roski Eye Institute. “He is a leader in advancing the USC Roski Eye Institute’s most ambitious goal of eliminating blindness and is very deserving of the university’s highest honor.”

Humayun holds more than 100 issued patents and patent applications — most in the area of bioimplants for ophthalmology. His innovative work is best exemplified by the development of the Argus II, the only Food and Drug Administration-approved retinal prosthesis system that allows those with certain blinding diseases to regain some useful vision.

“USC has been a home which has allowed me to do what I wanted to do – pursue a dream to restore sight to the blind,” Humayun told the audience in accepting the award. “I have been forever an optimist when it comes to envisioning ways to improve the lives of patients with the most debilitating medical problems, and I will continue to work diligently to help patients for whom there currently is no foreseeable cure.”

Also among the honorees at the event held was Thomas Buchanan, MD, professor of medicine and vice dean for research at the Keck School, who received the Associates Award for Creativity in Research. 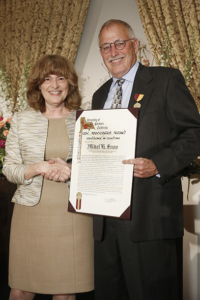 Buchanan, who also is director of the Southern California Clinical and Translational Science Institute, co-director of the Diabetes and Obesity Research Institute and endocrine division chief, received the award “for his dedication to improving lives, and for his crucial role in the fight against diabetes.”

“Tom has been a tireless champion in supporting the Keck School’s efforts to enhance our reputation as a top-notch research institution and is the Keck School’s most highly NIH-funded investigator,” Varma said. “He continues to set an example for all of our faculty members to promote creativity in their research.”

The 2017 Associates Award for Excellence in Teaching was presented to Mikel Snow, PhD, professor of cell and neurobiology (educational scholar) and Lt. Col. Earle and Patricia M. Smith Professorship in Neurogenetic Research. Snow was honored “in recognition of his unique approach to medical pedagogy, and his commitment to the academic success of his students.”

Inderbir S. Gill, MD, chair of urology, associate dean for clinical innovation and a past recipient of the Presidential Medallion, was recognized as a Distinguished Professor “for his mastery of the art of healing, and his efforts to advance surgical technology.” 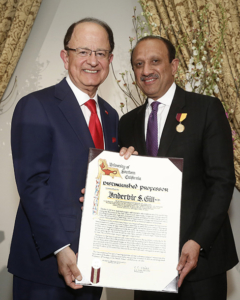 Stanley Azen, PhD, professor emeritus of preventive medicine, was presented with the USC Faculty Lifetime Achievement Award, “in tribute to his pioneering efforts in biostatistics, and his enduring enthusiasm for medical inquiry.” Azen is one of the “founding fathers” of the Keck School graduate programs in the Department of Preventive Medicine.