Thomas Coates, MD, professor of pediatrics and pathology at the Keck School of Medicine of USC and section head of hematology in the division of hematology oncology at Children’s Hospital Los Angeles, along with four other co-principal investigators, recently received a five-year, $9.5 million grant from the National Heart, Lung and Blood Institute of the National Institutes of Health. The award will fund research into the underlying physiology of sickle cell disease (SCD) and identification of biomarkers that will aid in the development of new treatment options.

“Sickle cell disease is a devastating disorder and progress toward developing new treatments for battling this disease has been limited by our inability to measure the basic physiology of the disorder in humans, said Coates, who is also a principal investigator at The Saban Research Institute. “Our unique approach involves sampling multiple physiological variables, using computational modeling to determine the underlying pathophysiology and identify biomarkers of interest. By translating these biomarkers into standardized tools, we will provide a way to monitor disease status and measure the effectiveness of new therapies for patients with SCD.”

Sickle cell disease is a life-threatening genetic disorder of hemoglobin, the molecule in red blood cells that supplies oxygen to the body. Instead of rounded, flexible discs, the red blood cells in SCD patients are stiff and crescent-shaped. These sickled cells can become lodged in the blood vessels and cause painful episodes that deplete the body’s oxygen supply and lead to organ damage, especially in the lungs, kidneys and brain. Sickled cells also break down prematurely, leading to a low red blood cell count. 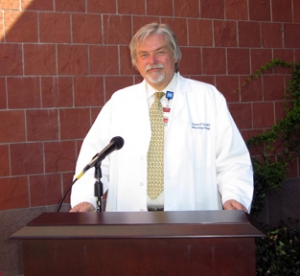 In previous studies, Coates and his colleagues discovered that individuals with SCD exhibit physiologically based biomarkers, such as an abnormally regulated autonomic nervous system (ANS) and resultant constriction of blood vessels. They hypothesize that these biomarkers of blood flow and tissue oxygen delivery reflect the collective results of all molecular and cellular pathologies, aside from the initial gene mutation, in SCD patients.

With this award from the NIH, Coates and the co-principal investigators will study their hypothesis. This multidisciplinary team will focus on developing and calibrating biomarkers that reflect ANS imbalance, pain-triggered constriction of blood vessels, vessel function and the brain’s blood and oxygen levels.