On May 10, 1979, ground is broken for the new site of the Kenneth Norris Jr. Cancer Research Institute. At the time, the effort was described as the “largest building project in the 99-year history of the University.” 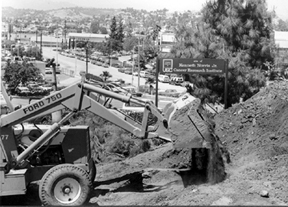 In remarks to the assembled crowd, Norris noted that cancer is a disease with widespread impacts. “It is a horrible, terrible disease and it’s got to be beaten,” he said. “I think of it in terms of war — that we’re going to wage a relentless war on this disease and with the staff and the talent that we have, I see no reason why we can’t make perhaps the major breakthrough here.”

Norris concluded his remarks by tying his support of the cancer center to his family’s history of supporting USC. “This does represent a continuation of the family tradition of support of USC — which we think is a great University — and more specifically to the development of this Health Sciences Campus, and to the facility which will rise here in the next few years.”