The newest addition to the urology staff at Keck Medicine of USC will fit right in working in a city noted for its celebrities — he’s been doing surgeries on high-profile patients in Latin America for years. One of his final cases before arriving in Los Angeles, in fact, was a successful prostate cancer surgery on the runner-up in Colombia’s most recent presidential elections.

Rene Sotelo, MD, joined the USC staff on Aug. 3 as professor of clinical urology at the USC Institute of Urology, just a few days after performing a robotic prostatectomy in Bogota, Colombia, on Oscar Iván Zuluaga, an economist who was the nominee of the Democratic Center political party in the 2014 presidential election.

At the time, Sotelo’s base of operations was in Caracas, Venezuela, which is his home country, but he had become known throughout Latin America as a leader in the use of robotic surgery to treat urologic cancers and benign conditions. Sotelo has published more than 50 peer reviewed scientific papers and 28 chapters in major urology books.

So, when Zuluaga received his diagnosis of prostate cancer, the political leader’s advisers sought out the top surgeon in that part of the world, which quickly led them to Sotelo.

“I had been traveling to Colombia and training surgeons in Colombia for many years,” Sotelo noted.

The surgery, which took place in July 2015, was particularly newsworthy in the Spanish-speaking world, and was covered by many news outlets, including an appearance by Sotelo on the Spanish-language edition of CNN.

The surgery’s result? “Now three months later, the cancer is completely extracted and Zuluaga is doing great.,” Sotelo said during an Oct. 13 interview in his new office at USC. “Just three or four weeks afterward, he was already back out doing campaign work [in his role as party chairman.]”

Although Sotelo now has a new base of operations, he will continue to be a major medical presence in Latin America, serving as an ambassador for the USC Institute of Urology and the USC Keck School of Medicine overall. His passion for surgical innovation, advancing the field, and his worldwide teaching experience coincides with and further strengthens the overall philosophy of the Keck School of Medicine of USC and its Department of Urology. 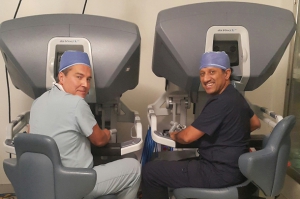 “Dr. Sotelo is the premier robotic and laparoscopic surgeon in Latin America,” said Inderbir S. Gill, chairman and professor, Catherine and Joseph Aresty Department of Urology, and executive director, USC Institute of Urology at the Keck School of Medicine of USC.

“And we have tasked him with further increasing his existing partnerships in Latin America to enhance USC’s reputation as a world-class medical enterprise,” Gill said. “In the two short months he has been here at USC, we have already seen a dramatic increase in the number of Latin American patients flying to USC Urology for advanced surgeries.”

Sotelo is excited to spread the word in Latin America about USC, but he also is looking forward to engaging with his new colleagues in Los Angeles. Sotelo is a pioneer in robotic surgery for complex urinary fistulae in females and males, for example, as well as treatment of benign prostate enlargement and inguinal lymph node dissection for cancer.

“Over time, I got a lot of experience in repairing all kinds of fistulas, which are abnormal communications between different organs and the urinary system,” Sotelo explained. Prior to joining the Keck Medicine staff, he had occasionally traveled to USC to observe and learn, and also to share his knowledge.

Gill’s pioneering work in robotic surgery for cancer has been a big part of what Sotelo refers to as his “learning network” ever since Gill was a visiting professor in Venezuela 18 years ago. Thereafter, Sotelo would observe Gill’s surgeries in person, if possible, but mostly he watched them on video to help himself learn. And he was dedicated.

Sotelo recalled an instance in which he peppered Gill with questions after he noticed a slight change in a surgical technique that he’d seen 20 times. “What happened here?” Sotelo asked Gill. “You turned your hand left or right. Why did you change it for this patient?”

Once Sotelo got his answers, he would pass along what he had learned about Gill’s techniques to others in Latin America. Over time, the relationship became increasingly reciprocal — Sotelo pioneered some techniques of his own and exchanged those discoveries with Gill.

“We are looking to Dr. Sotelo to open big doors for USC Medicine in Latin America,” Gill said. “And it’s already beginning to happen — we are already on our way!”

As, for Sotelo, coming to the United States represents a chance to work not just with Gill but with many of the best surgeons anywhere.

“USC has the best urologic team in the world,” Sotelo exclaimed. “They are always thinking of new things — 30-plus surgeons, all the best in their specialty. It’s a unique opportunity.”

It’s also an opportunity with fewer logistical and economic limitations. Soon after arriving at USC, Sotelo and Gill performed a complex robotic surgery together. In South America, Sotelo had been using an older generation of the robotic instruments.