In 1995, Veronica Lorenz was first diagnosed with ependymoma tumors in her spine.

“I turned 27 in the hospital,” she said of what would become the first of many surgeries to treat the central nervous system tumors. “I was OK for about 16 years, but after I had my daughter and my mother passed away, everything took a turn.”

The tumors returned in 2011, and Lorenz opted for radiation, hoping to avoid another painful procedure. But six months later, she was on the operating table again. What followed was a series of complications and surgeries, including a serious infection and surgical placement of facia from her hip into her spine.

“I had three surgeries in six weeks; it was incredibly hard on my body,” recalled Lorenz, a former Hollywood make-up artist and Los Angeles-based entrepreneur. Lorenz was still recuperating in the summer of 2013, “when everything started going backwards again,” she said. 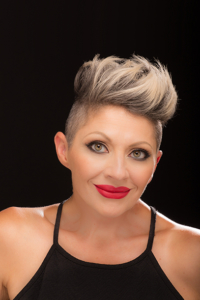 Her neurosurgeon found a large cyst pushing on her spinal cord. After three attempts to drain the cyst, Lorenz had her final and most aggressive surgery.

“They got the cyst and 98 percent of the tumor,” she said. “But I ended up losing the feeling in my hands and arms. I have a little bit of feeling in my left thumb and a small amount in my left pointer finger, but that’s it.”

The surgery caused Lorenz to lose her sense of proprioception — the brain’s innate sense of the body’s position within 3-D space. “If I have my eyes closed, I can’t tell where my arms are in space,” she said. “They move like a normal person’s arms, but they don’t react the same way.”

“There’s been many times in the shower when I’ve had my eyes closed and I’m like, ‘Who’s touching me?’” Lorenz continued. “I think it’s my husband but it’s just me — the stranger within.”

“Her child was an infant at the time, and (Veronica) came in crying because she couldn’t hold her baby,” said Rocker, who treated Lorenz for about three years. “That was devastating for her.”

During their initial sessions, Rocker said that occupational therapy was a safe place for Lorenz to find emotional release. “She could let it out,” Rocker said. “Her main challenge was recognizing what she had been through and that she was a survivor.”

Even to Rocker, who is also a certified hand therapist, Lorenz’s injury was unique.

“I see a lot of people with devastating trauma, but this was so different,” Rocker said. “Her sensation was so absent. If she closed her eyes and I bent her arm, she couldn’t tell if her hand was up or down.”

Rocker worked with Lorenz to develop strategies to care for her child including bathing, diapering and feeding. Cooking also posed challenges.

“I was getting a lot of burns because I couldn’t feel, but I had to cook for my daughter,” Lorenz explained. “Every day Janice took inventory of my hands, treated them and took care of them.”

Lorenz also gave Rocker the nickname “MacGyver” after she fashioned a pair of custom orthotics on the spot using nothing more than Velcro, braided elastic and elastomer putty to pad her delicate, insensate hand.

“Her hand was going into a claw position, and she didn’t have the strength or sensation to put on (more traditional) orthotics,” Rocker said. “We explored adaptive equipment based on what she felt she needed; showed her options and she liked being considered a partner in her rehabilitation process.”

Lorenz’s treatments included a lot of body-mind work and weights to build her strength.

“She wanted to do straight exercises because she used to lift weights,” Rocker recalled. “Whatever she wanted to work on, I would try to make that part of her routine.”

“Janice really thought outside the box,” Lorenz said. “She listened to what I had to say and we worked together to get things done.”

Lorenz so benefited from her sessions with Rocker that she fought her insurance company to continue treatment.

“When my coverage changed, I had to see whoever the HMO recommended and it was kind of a joke,” Lorenz recalled. “The therapists had me do these textbook exercises that weren’t addressing me. I needed real therapy.”

Despite the many gains Lorenz made during her recovery, she couldn’t continue her career as a makeup artist.

“Janice even helped me when I was applying for disability,” Lorenz said. “She gave me keywords to use and helped me find the information I needed. She took the time to go above and beyond; she really cares.”

While working on the “The Hunger Games” in 2012, Lorenz came up with the idea of an eyeliner stamp to easily create a cat-eye makeup look.

“It gives you continuity when you (film) out of order and it would be quick and easy to do,” she said. “I was starting to have difficulty with eyeliner because my hands weren’t working quite the way I wanted them to. I think subconsciously I could see the writing on the wall.”

“We see posts on our (social media accounts) all the time, especially from women with MS, Parkinson’s or even carpal tunnel,” Lorenz said. “They’re grateful and thankful; this helps them feel empowered again.”

Once again, Rocker was there for support.

“I gave her a few strategies for how to market it to people,” said Rocker, who has also recommended the product to clients. “She made lemonade out of lemons. She saw there was a need for this and did it. I’m beyond proud of her.”