Amid a celebration of some of the best and brightest at the Keck School of Medicine of USC, Cheryl Mae Craft, PhD, was thinking about her “grandchildren” — the students of her former students, her legacy of physicians and researchers from years in the classroom.

“I have a lot of adopted scientific children,” said Craft, the Mary D. Allen Chair in Vision Research. “And it just pleases me so much when one of my former students comes up and says, ‘I’m mentoring this student, so this is your grandchild.’ Just like we pass on our scientific knowledge, we need to pass on our passions and love for science.”

Craft was one of more than 150 people who gathered for the 10th annual Keck Scholarship Luncheon, held Oct. 28 at the California Club in Downtown Los Angeles. In addition to thanking donors for their continued support, Craft was recognized for her role as president of the Achievement Rewards for College Scientists (ARCS) Foundation, Los Angeles Founder Chapter.

“I stand here today as another ARCS success story,” said Kristin Rand, PhD, MPH, a postdoctoral research fellow in preventive medicine. “Without the support of the local foundation, and especially the generosity of Cheryl Craft, I wouldn’t have been able to dedicate the last three years of my life to the identification of genetic mutations leading to prostate cancer and multiple myeloma.”

The scholarship program is one of the many ways the Keck School helps its students succeed, said Henri Ford, MD, MHA, vice dean of educational affairs.

“When you get good students, you expect great outcomes,” Ford said. “Our philosophy is that if they don’t succeed, we are failing as educators. So we take this very seriously and we ensure that they are equipped with the necessary tools for success.” 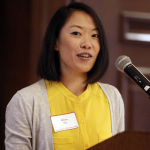 Dozens of students receive scholarships each year, including Allison Wu, MD, a 2015 graduate of the Keck School who is now a pediatrics resident at Mattel Children’s Hospital UCLA with a research interest in gastrointestinal and hepatobiliary disorders of infants. She was an ARCS Foundation Scholar and recipient of the Robert Fraser California Community Foundation scholarship.

“I’m very grateful for the ARCS Foundation for allowing me to pursue research through medical school,” Wu said. “I’m hoping to continue that research through residency and in my medical career.”