If you’re a math and science whiz studying brain scans and analyzing genetic biomarkers for a living, you’re not expecting to get the Hollywood treatment. But there she is, Neda Jahanshad, USC neuroscientist, peering ever so coolly over her shades as the “brain mapper” in the L.A. Weekly’s recent People of 2015 coverage. 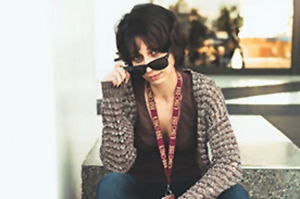 Neda Jahanshad was profiled in the People 2015 issue of the L.A. Weekly.

Much to her surprise, Jahanshad was selected among 54 actors and singers and artists and fashionistas to be profiled as trendsetters by the L.A. Weekly in its annual celebration of fascinating people in Los Angeles. In her case, it started with a research paper unglamorously titled, “Common Genetic Variants Influence Human Subcortical Brain Structures.”

“A reporter called,” Jahanshad said. “She had read about one of our recent studies, about the publication in Nature, and I was one of the co-authors.”

She was one of almost 300 authors on the Nature paper, which was led by Derrek Hibar, an associate professor in the Keck School of Medicine of USC. That paper built on work being done by Jahanshad and her research colleagues as part of a project known as Enhancing Neuro Imaging Genetics through Meta Analysis, or ENIGMA. Jahanshad is among the leaders of a worldwide network of neuroscientists that is sharing findings in hopes that the pooled information will crack the brain’s genetic code.

It’s a groundbreaking effort, as the LA Weekly story makes clear: “They’re trying to gain a deeper understanding of the human brain, mapping it and uncovering aspects of it that no one has ever understood.”

Jahanshad first became involved with the brain-mapping project while studying at UCLA for her PhD in biomedical engineering with Professor Paul Thompson, PhD, and she stayed on when Thompson and his research partner, Provost Professor Arthur W. Toga, PhD, moved their Institute of Neuroimaging and Informatics to USC in 2013.

Yes, she does endure some teasing from friends who are still at UCLA as a result, but Jahanshad is “very happy to be part of the USC enterprise.”

At 30, she has assumed a leadership role in the ENIGMA project. Building on her engineering background, she is heavily involved in the imaging aspect, building tools to look at brain scans and extract information from them.

She helps produce computer models that process the data from thousands of MRIs obtained from research partners. The goal is to establish a baseline map of a normal brain that will help in discerning patterns common to various neurological disorders.

“We see the brain as a wired network,” said Jahanshad, who is an assistant professor of neurology at the Keck School of Medicine.

A typical workday? That’s a rarity.

“People may need to consult from all over the world,” Jahanshad explained. “I might be on a conference call at 6 a.m. Or 11 p.m.”

And the project always seems to be expanding.

“When we start something, we suddenly realize there are so many other aspects of the brain that we can look into,” Jahanshad said. “A current example is looking at HIV across the world. There are various strains. But what is the common effect on the brain?”

Finding commonality from seemingly endless data sources can be challenging, but the global scope of the project is a key to its success.

“When its combined, the knowledge is so much greater than what one can find alone,” Jahanshad said. “Something that is subtle in one case may be noticed as a pattern when you combine the info with many, many cases.”