How do bones heal, and how could they heal better? The answer to these questions may lie in a newly discovered population of “messenger” cells, according to a recent USC Stem Cell study published in the journal eLife.

“With nearly half a million patients in the U.S experiencing failed bone repair every year, stimulating these ‘messengers’ and other key cell types could accelerate repair and prevent non-unions,” said corresponding author Francesca Mariani, PhD, associate professor of stem cell biology and regenerative medicine, and integrative anatomical sciences at the Keck School of Medicine of USC.

In their study, first author Stephanie T. Kuwahara and her colleagues looked at the mammalian rib bone, which regenerates uncommonly well. In fact, orthopaedic surgeons have noted that missing sections of the rib as long as eight inches will readily grow back in patients. 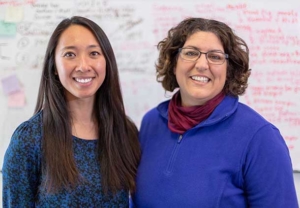 By observing similar rib surgeries in mice, the scientists proposed a model for how mammals repair large bone injuries, and identified key cell types essential to the healing process.

One of these key cell types is a small population of “messenger” cells, which can be identified by the activity of a gene called Sox9. These messenger cells reside in the sheath of tissue, called the periosteum, which surrounds each rib. Upon injury, a protein called “Hedgehog” activates the messenger cells, which in turn tell neighboring cells to differentiate into a hybrid between cartilage and bone. These hybrid cells form the “repair callus” that converts into newly regenerating bone.

“Future investigations into how messenger cells promote callus formation may lead to better strategies of boosting bone repair in other parts of the body that do not heal as effectively as the ribs,” Mariani said.

The scientists also noted that while hybrid bone-cartilage cells play a critical role in regenerating injured ribs, they are surprisingly absent while the ribs originally form during embryonic development. This calls into question an existing dogma in many biology textbooks: that regeneration is a recapitulation of development. Instead, regeneration and repair may be their own distinct processes, involving unique cell types and genetic programs.

Ninety percent of this research was supported by federal funding from the National Institutes of Health (grant numbers T32HD060549, R21DE023899, R35DE027550, R21AR064462, and R01AR069700). Ten percent was funded by non-federal sources including the James H. Zumberge Research and Innovation Fund, and a USC California Regenerative Medicine Initiative Award.