Next time you’re sitting in freeway gridlock, consider the complex system of traffic moving through each and every one of your cells — proteins and other molecules all trying get to the right place at the right time to perform a specific function, such as contacting muscles so you can lay on the horn when the distracted driver in front of you doesn’t move.

Uncovering the mechanisms through which that intracellular traffic works earned researchers Michael P. Sheetz, PhD, of Columbia University, James A. Spudich, PhD, of Stanford University and Ronald D. Vale, PhD, of the University of California, San Francisco, the 2013 Massry Prize.

The multidisciplinary trio, who began working together in the 1980s, visited the Health Sciences Campus on Oct. 10 to discuss their work in defining the protein motors that move molecules inside the cell. They also identified the fuels for those motors, a multifunctional nucleotide known as ATP that transports chemical energy within cells.

According to Shaul G. Massry, MD, professor emeritus of medicine and physiology & biophysics at the Keck School of Medicine of USC, the discovery is significant because many diseases develop because of abnormal transport of proteins. 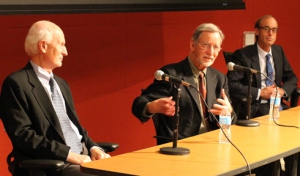 “Imagine a post office,” Massry said. “You put your mail in, and they need to take it to a certain address. If they take it to another address, there is chaos. If we don’t understand how cells function, we’ll never be able to treat derangements.”

One abnormality Spudich has been studying is hypertrophic cardiomyopathy, a hereditary condition that affects one in 500 people and is often to blame when seemingly healthy athletes suddenly die during strenuous exercise. A mutation in the cardiac myosin protein causes cardiac muscle to grow so thick that the heart stops pumping blood efficiently.

While Spudich admits it will be some time before science finds an answer to why the mutations cause the disease, he said that with new understanding of protein motility they can already begin thinking about small molecule therapies that will lower the muscle power output back to normal.

Vale’s work over the past decade has been focused on dynein, a motor protein that is one of the largest protein complexes found in cells. He said dynein has the massive challenge of communicating small chemistry over a relatively long distance from its fuel-bonding site to its “feet” so that it can walk along its microtubule track within the cell.

Vale and his team are detectives investigating how this protein moves, they have uncovered a lot of clues, but have not yet solved the mystery. Still, each clue brings science closer to understanding how to study the many proteins that remain to be studied in biological systems.

“I think we’re really going to need to understand the details of how these protein machines work if we’re going to think of new strategies of treating disease,” said Vale.
Sheetz focused his lecture on how cells use their protein motors and other motility mechanisms to sense their neighbors and their environment to interact dynamically and create the shape of the organism. He’s interested in the feedback mechanisms through which cells sense surface rigidity, an issue at the heart of cancer and many other diseases when rigidity-dependent growth becomes abnormal.

The Meira and Shaul G. Massry Foundation established the Massry Prize in 1996 to recognize outstanding contributions to the biomedical sciences and the advancement of health. Each year, a scientific theme is chosen by the Foundation, and a committee of distinguished professors representing both USC and UCLA selects the laureates. The Massry Prize activities at USC are hosted by the USC Institute for Genetic Medicine.

Sheetz, Spudich and Vale find themselves in good company, considering 12 of the 31 Massry recipients have gone on to receive the Nobel Prize. Most recently, 2010 Massry laureates James E. Rothman and Randy Schekman were awarded the 2013 Nobel Prize in Physiology or Medicine.

The full 2013 Massry Prize lectures can be viewed at http://tinyurl.com/llnalme.