The USC Mark and Mary Stevens Neuroimaging and Informatics Institute has recruited Danny JJ Wang, PhD, MSCE, to be the director of Imaging Technology Innovation. 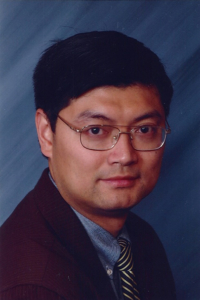 Wang, a professor of neurology at the Keck School of Medicine of USC, brings his entire team of brain imaging specialists, the Laboratory of Functional MRI Technology (LOFT), formerly of UCLA’s Ahmanson-Lovelace Brain Mapping Center, to the INI’s new home in revitalized Stevens Hall. The team includes two junior faculty members, two graduate students and a summer intern student, to be joined in the fall by a postdoc and a visiting scholar.

Wang, who obtained his PhD in biophysics from the Beijing MRI Center for Brain Research, Institute of Biophysics, Chinese Academy of Sciences, has worked at the forefront of imaging for nearly 20 years. His postdoctoral training, in MRI biophysics and neuroscience at the University of Pennsylvania, where he was research assistant professor of radiology and neurology, included additional clinical research training and a master of science in clinical epidemiology. He then joined UCLA in 2010.

Wang is known for making, and freely distributing, software that pushes the limits of MRI in the human brain. LOFT developed Complexity, a toolkit for processing data from fMRI, and specialized scanner pulse sequences used by hundreds of MRI researchers worldwide, such as those for arterial spin labeling, a noninvasive technique that allows investigation of the perfusion of blood in the brain without radiation or a contrast agent.

“He is a great asset and furthers our mission as leaders in brain imaging. He and his team will provide the expertise required to get the most out of our imaging resources, and they open up new realms of translational research,” said Arthur Toga, PhD, director of the USC Stevens Neuroimaging and Informatics Institute and of the Laboratory of Neuro Imaging (LONI).

“What I’m excited about at USC, is not only do we get to work with amazing colleagues but we also have the most advanced technology available anywhere,” Wang said of the Center for Image Acquisition’s MRI scanners, a 3 Tesla Siemens Prisma now operational and a 7 Tesla Siemens Terra, slated for fall delivery. “We will have the first FDA-approved 7T magnet in the United States, so it will offer a dual mode — a clinical mode and a research mode — which will be the very first of its kind in the U.S.,” Wang said.

“With this new technology we have very flexible capabilities,” Wang said. “From imaging the whole brain to zooming in to a particular brain region, this instrument will provide ultra-high resolution.”

This will enable unprecedented detail when imaging specific regions, such as the hippocampus, which is associated with learning and memory and is profoundly affected by Alzheimer’s disease.

“Imaging brain circuits with this improved fidelity will enable us to pose new questions about the function of the brain, both in health and in disease,” Toga said.

“Our ultimate goal is to understand brain activity at the neuronal circuit level, so we want 200-300 micron resolution,” Wang said.

This is roughly a fourfold improvement over current resolution, in each of the three spatial dimensions, resulting in 64 (43) times the information obtained from a given volume.

“At that level you are really looking at groups of neurons,” Wang said. “It’s microscopic.”

Beyond increasing the resolution of images, LOFT will also focus on decreasing the time it takes to acquire them.

“We’re pushing the temporal resolution as well,” Wang said. “Right now it’s already sub-second, and our ultimate goal is to really reach 50-100 milliseconds,” roughly a fourfold increase in image acquisition speed over commonly used techniques, which could conceivably change the nature of the questions fMRI will be able to answer.

“If you want to reach really high spatiotemporal resolution, you are collecting big data, in every sense of the term,” Wang said. “To extract information you need to apply very complicated reconstructions, nonlinearly, and these computations take time.”

“The USC Stevens Neuroimaging and Informatics Institute has an impressive computer cluster located conveniently across the hall,” Wang said, “so we are going to take advantage of that and build a pipeline to do more real-time reconstructions. We will move multiple gigabytes of data every second to perform the computations and few facilities would be capable of handling it.”

“That’s unique to USC,” Wang said. “We have the best imaging, computational and informatics resources, and that’s a great strength.”

Once operational, this USC image reconstruction pipeline also could be made available for use by researchers worldwide. This develop-and-share mentality is at the core of the USC Stevens Neuroimaging and Informatics Institute, who are pioneers in the sharing of brain imaging data and analysis software.

“One of the things we are most proud of is developing tools that can be used by other scientists,” Toga said. “One good example is the LONI Pipeline, which is a workflow environment that simplifies the data analysis process dramatically, enabling investigators to probe their data in ways they would otherwise be unable to do.”

“I think that’s the way to go,” Wang said, “offering a service to the community, like the LONI Pipeline. I think this is the beginning of a new way of doing things. That’s why we are excited to be here at the USC Stevens Neuroimaging and Informatics Institute, because it’s a new kind of science. There’s lots of opportunity — but of course it’s also lots of hard work.”