John W. Carlson III likes keeping busy. He simultaneously pursued two bachelor’s degrees at USC — in Biochemistry and East Asian Languages and Cultures — and enrolled in USC’s progressive degree program, which enabled him to begin work on a master’s degree in Regulatory Science, part of the USC School of Pharmacy, even as he completed his undergraduate studies.

“The progressive degree is a powerful option for students like John, who are ambitious and want to move very quickly into a targeted career in industry,” said Frances Richmond, PhD, director of the USC International Center for Regulatory Science. 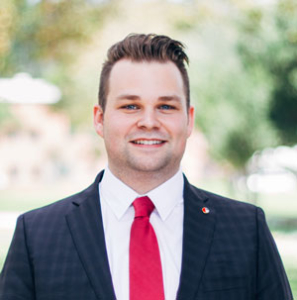 John W. Carlson III enrolled in USC’s progressive degree program, which enabled him to work on a master’s degree in Regulatory Science even as he completed his undergraduate studies. (Photo/Courtesy)

The son of a pharmacist and nurse, Carlson grew up in Fremont, Michigan, where his interest in Asia was piqued by his town’s international friendship program with Yahaba, Japan.

During his sophomore year, Carlson connected with Richmond and USC School of Pharmacy Professor Melvin Baron, PharmD, to learn more about graduate school options. He soon became president of the USC Pre-Pharmacy Society, in addition to serving as vice president of the Japanese Student Association.

While exploring his future in the field of pharmacy, he added the Regulatory Science program to his arsenal of interests.

“One year, the Pre-Pharmacy Society had an industry speaker, and that’s when I first learned what’s really required to take a drug from bench to market,” he recalled.

The USC Regulatory Science program is designed to expand students’ knowledge of regulatory affairs, clinical research and quality systems, and to develop regulatory science leaders in industry, government and academia.

“When I took that first class in Regulatory Science, I thought, ‘This is exactly what I want,’ ” Carlson said.

While working on the Regulatory Science degree, Carlson participated in a yearlong exchange program with Waseda University’s School of International Liberal Studies in Tokyo, where he focused on economy and law as well as studying the Japanese language. He also served an internship in global government affairs and policy with EMD Serono, a global policy advocacy firm. The firm’s affiliate, Merck Serono, hired him as a Tokyo-based policy analyst. 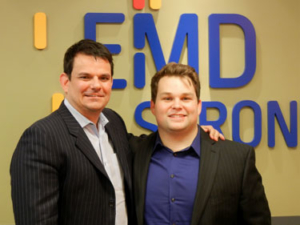 “We’ve been very impressed with the quality of his work, his dedication and his interest in government affairs and policy, which is distinct from a traditional regulatory track,” said Carlson’s supervisor, Kent Jancarik, MS, senior director of global public policy at Merck Serono. “John has played a critical role in leading the development of our company’s internal and external policy position statements … he has been a good ambassador for the USC Regulatory Science program.”

Carlson says that his experiences thus far have opened his eyes to the range of possibilities open to graduates of the Regulatory Science program.

“A degree in Regulatory Science doesn’t limit your career,” he said. “Everyone in our office has a very diverse background. It can be hard to enter the industry without any pharmacy or regulatory science experience. I definitely think the master’s program gives you that foot in the door.”