Senior Emily Zolfaghari found her passion for health at age 15 when she had to face devastating information.

“My sophomore year of high school, my mom was diagnosed with cervical cancer,” she recalled. “Through the process, I started learning a lot about different cancers and became interested in what else could affect the growth of cancer.”

Zolfaghari poured her curiosity and concern into the research of potential risk factors for cancer. She theorized that, with the rise in both reproductive cancers and obesity, sugar might be the link.

The Santa Rosa Valley resident then proposed a study to several universities. USC Professor Louis Dubeau invited the budding scientist to his lab at the USC Norris Comprehensive Cancer Center, where she found guidance and learned sophisticated research techniques.

“From then on, I really wanted to come to USC,” she said.

At just 17, she shared her findings as the youngest speaker at the TEDxConejo Conference. Shortly after, she enrolled at USC, becoming the first in her family to attend college.

“I used to be embarrassed to say I was a first-generation college student, but here I found so many students who are, too,” she said. “To have that support made me feel really good about myself. Now if someone asks me, I’m proud of it.”

A passion for global medicine

Zolfaghari has relished the many research opportunities she’s found at USC. A health promotion and disease prevention studies major at the Keck School of Medicine of USC, she was recently named an undergraduate fellow for a joint study with the USC Global Health Institute, Operation Smile and Children’s Hospital Los Angeles on the genetic and environmental factors of cleft palate syndrome.

As part of the study, she heads to the Philippines this summer to conduct research with children and families.

“It is amazing that USC wants you to be involved in research as a student, especially as an undergraduate. I found my passion for global medicine as a result,” she said. 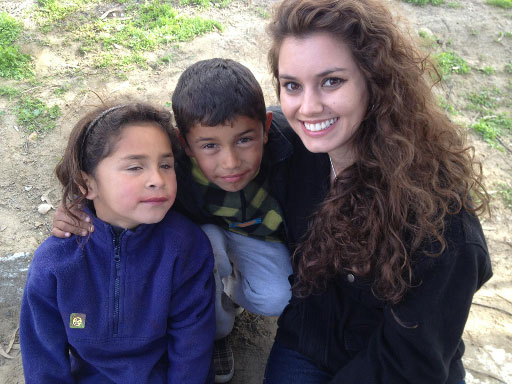 For the past three years, she’s traveled to Tijuana every three months with Healing Hearts Across Borders at USC, which provides free medical care to patients in impoverished communities.

“We don’t get any sleep on the trips, with packing and preparing and getting through Border Patrol with bags of medicine,” she said. “But it’s so rewarding to help people who are in a vulnerable state in underserved communities.”

As a resident adviser for the Health and Wellness floor in New/North Residential College, she galvanized students to make care packages for her trip south.

Zolfaghari, who also finds time to be a peer health educator at the USC Engemann Student Health Center, credits USC with opening her eyes to the world’s diversity.

“I used to live in a bubble. USC opened me up to so many things, and I’ve met so many international students here,” she said. “My experiences here truly made me find out what I’m passionate about and what to do with my life.”

When she walks in the 2014 commencement ceremony to accept a Bachelor of Science from the Keck School — with her mom, now recovered, cheering from the audience — Zolfaghari is just a semester away from earning her master’s degree from the USC Davis School of Gerontology.

She plans to apply to medical school, spend a gap year working for either UNICEF or the International Medical Corps and eventually serve as a physician for Doctors Without Borders.

“There are so many health problems abroad that we take for granted domestically,” she said. “If I can find it within my power to help someone, I will.”