Keck Medicine of USC’s Inderbir S. Gill, MD, has been even busier than usual lately. On Monday, May 18, he delivered the annual Ramon Guiteras Lecture at the 2015 meeting of the American Urological Association (AUA) in New Orleans, the seminal invited lecture of this society. By Friday, May 21, he was back in Los Angeles to host a visiting delegation from Africa.

Gill, professor and chair of the Catherine & Joseph Aresty Department of Urology and founding executive director of the USC Institute of Urology at the Keck School of Medicine of USC, focused his lecture on advances in the field of minimally invasive robotic and laparoscopic surgery for urologic cancers. A few days later, he explained the benefits of being at USC to apply and teach those techniques during his meeting with a delegation of officials and VIPs from Buganda, a kingdom within the African country of Uganda. 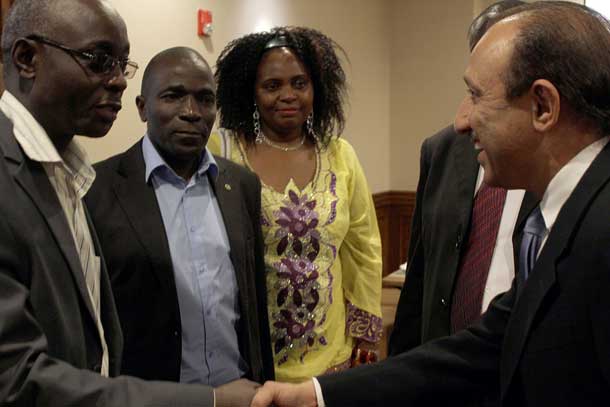 Officials from the Kingdom of Buganda meet with Inderbir S. Gill, MD.

“USC is among the finest research and educational institutions in the country,” Gill said as the 14-member delegation sat down to a lunch reception he hosted with Keck Medicine of USC leaders at the Edmondson Faculty Center. “Getting into USC for students is difficult, but getting into the Keck School of Medicine of USC is especially difficult.”

The delegation included 1st Deputy Prime Minister Ambassador Emmanuel Ssenduala and Deputy Speaker of Buganda’s Parliament Ahmed Lwasa. Buganda is the kingdom of the Ganda people, Uganda’s largest ethnic group, and is considered among the largest kingdoms in the central African country.

In Gill’s department, advanced robotic surgery complements open surgery for all major urologic cancers: kidney, prostate, bladder, testis. This has underpinned remarkable growth: Robotic surgery has grown from being only 1 percent of all urologic cancer operations in 2006 to 77 percent in 2013. These USC numbers handily exceed national data.

In New Orleans, Gill told fellow urological surgeons attending his AUA lecture that “there is not a single oncologic operation today where robotic outcomes have been shown to be any worse than open surgery, yet with superior patient recovery.” The AUA meeting is the largest urologic meeting in the world, attended by over 20,000 urologists.

Despite two decades of advances, Gill said the best is yet to come. “Advances are not just technical and surgical. Newer technologies are giving surgeons far more real-time data points in the operating room, allowing more precise surgery. For example, we are beginning to super-impose 3D modeling onto the surgical field, thus providing augmented reality information to the surgeon,” he said.

“In 2015, the only thing that should always be open is our minds,” concluded Gill, who was also recently appointed by the AUA Board of Directors to the new position of Chair, Global Initiatives. He will assume this role on June 1.