USC Norris patient has an eye for soothing images

For patients and visitors to USC Norris Cancer Hospital, the effect of new photographs in the lobby can be subtle, but for the man who took the photographs, they can bring some calm to people during a very stressful time in their life. 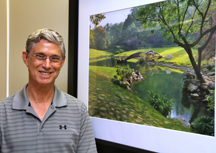 USC Norris cancer patient Jim Martellotti displays one of his photos in the lobby of the cancer hospital.

It is a situation Jim Martellotti knows well. Not only did he take three of the framed photos strategically located in hospital’s lobby and seating areas, but he’s also a longtime cancer patient.

When the lifelong shutterbug heard the hospital was looking to decorate the lobby and some upper floors after a renovation, the 65-year-old Martellotti knew he wanted to be part of it.

To his surprise, three of his submissions were selected for display.

“I’m very happy about that,” he said. “They get seen by the most people.”

One of the photos — hanging near the admitting desk — shows a wooden bridge surrounded by lush greenery. It was taken at the Huntington Library in San Marino. The other two are near the Harold E. and Henrietta C. Lee Breast Center and feature lush green knolls and serene ponds — shots that were taken on a business trip to China.

Martellotti was diagnosed with prostate cancer in 2001. He was treated successfully at Norris, but had a recurrence in 2006 and radiation treatment in 2009. He did not mind the radiation so much; it was the almost 40 commutes back and forth to his home in Tustin that wore him down.

“It was fun at first, except for the drives back and forth,” said Martellotti, who owns a precision tool and dye company. Other than [some pain near the end] I was quite interested in the [radiation] machine. I wanted to know what frequency it ran at.”

It was at a hospital function for the foundation that Martellotti met May Bulaon, an administrative assistant at the hospital. She told Martellotti that the facility was looking for pictures to hang on the walls and encouraged him to submit some for consideration.

Bulaon said his pictures were chosen for specific reasons. The bridge in the picture near the admitting desk is a metaphor for the journey patients are on.

“It’s leading to something,” she said. “When you look at the picture, it looks like a path. There’s a light at the end of the tunnel.”

And the two near the breast cancer area are “like a dream. They’re just calm and serene,” she said. “That’s why we chose those pictures.”

Martellotti accepted no money for his work. He is just happy that they are displayed where they can lift peoples’ spirits. And he enjoys knowing that people will see beauty in something like a flower that they might have overlooked before.

“It’s amazing the beauty that’s in flowers that, since we see them all the time, we take for granted,” he said.