Rohit Varma, MD, MPH, the noted physician and scientist recognized across the globe as a visionary leader in the epidemiology of eye diseases, has been formally installed as dean of the Keck School of Medicine of USC and the May S. and John Hooval Dean’s Chair in Medicine. 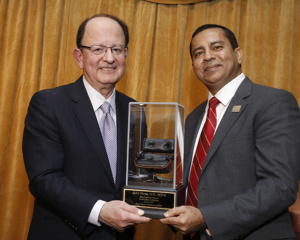 USC President C. L. Max Nikias, left, hands a replica chair to Keck School of Medicine Dean Rohit Varma, when he was installed as the May S. and John Hooval Dean’s Chair in Medicine, on Jan. 25 at Pappas Quad. (Photo/Steve Cohn)

Varma was honored by a standing-room-only crowd of USC officials, staff, faculty and students during a Jan. 25 ceremony on the Health Sciences Campus. He was announced as dean of the Keck School in November, after serving as interim dean of the school since March.

“Dean Varma will accelerate us into the future,” Nikias said. “Healing, passion and hope — these words speak to the character of our new dean. His journey to today’s celebration is the result of dedication, determination and a heart that can teach us all about compassion.”

Varma, who was joined at the ceremony by his family, said he will focus on strengthening a spirit of collaboration, creativity, compassion and community among faculty, students and staff.

“There is a sense of real optimism that all of us are on the precipice of something amazing,” Varma said. “That feeling is not just found among our faculty, but also among our staff and students.”

Knowing as a child he wanted to follow in his uncle’s footsteps and pursue a career in ophthalmology, Varma earned his medical degree at the University of Delhi, India. He spent his free time volunteering in a leper colony, where he worked alongside Mother Teresa.

Varma, who went on to earn a master’s degree in public health from Johns Hopkins University, has spent much of his career focusing on minority populations. His primary research focuses on epidemiologic studies of eye disease in children and aging populations. He also has been a principal investigator of eye studies focusing on Latino, Chinese-American and African-American populations.

“He is driven by an energy unknown to most people,” Nikias said. “By focusing on minority populations that are all too often ignored, Dr. Varma has cemented his reputation as a trailblazer.”

Varma joined the USC faculty in 1993, obtaining a professorship in 2005 with appointments in ophthalmology and preventative medicine. He is the 23rd dean of the Keck School, the oldest medical school in Southern California.

Varma said he envisions new, strong partnerships being created between the medical school and the university’s other professional schools.

“I have an enduring belief in the power and potential of USC to change the world,” Varma said. “I am extraordinarily grateful to be a part of the incredibly supportive community we enjoy at Keck Medicine and, more broadly, across the university. It’s this environment that will be a foundation for our next wave of great accomplishments.”

Varma also touched on the transformative work being done by Keck School faculty and said that physicians must ensure their work embodies compassion.

“The human touch and strong connections with our patients can never be automated,” Varma said. “We must ensure that our medical education instills compassion, empathy and understanding in the physicians of tomorrow, so that the human connections remain at the core of healing.”

In addition to his role as dean of the Keck School of Medicine, Varma serves as director of the USC Gayle and Edward Roski Eye Institute and holds the Grace and Emery Beardsley Chair in Ophthalmology. For the past 10 years, he has been one of the leading recipients of research funding from the National Institutes of Health.